Benji and the Yin/Yang Man 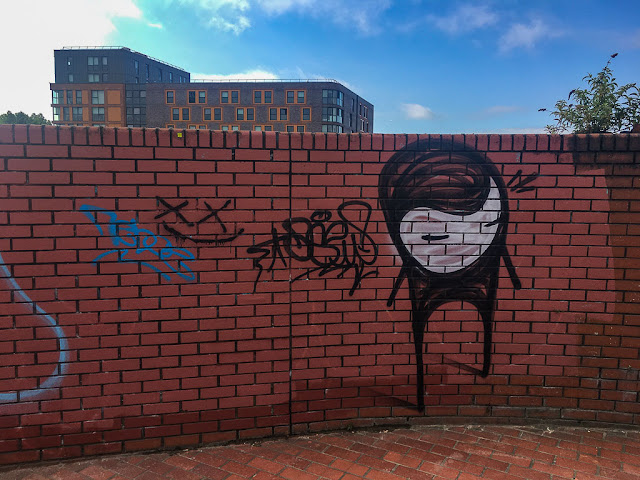 This peculiar graffiti figure showed up on a wall along the so-called Potteries Path. Is he supposed to be the yin/yang symbol? Because that's what I'm seeing. I like the shadow effect from his legs. 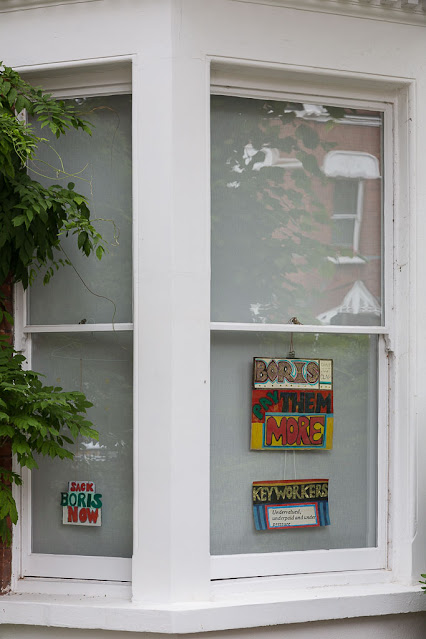 And remember the house with the anti-Boris posters in the windows? Well, they're still up, and yesterday I noticed a new one: "Sack Boris Now." Unfortunately it looks like that's not going to happen, but he sure has been walking a thin line lately. (I still think this whole partygate scandal is rather overblown, but it has made him a pariah and almost cost him his job.)

And finally, we got several bags of book donations in recent days from families that are moving. We usually try not to accept donations because often it's stuff we can't use, but in this case they're mostly recent books for young people and they're in pretty good shape.

Among all the Robert Muchamore and Anthony Horowitz, though, I found this: 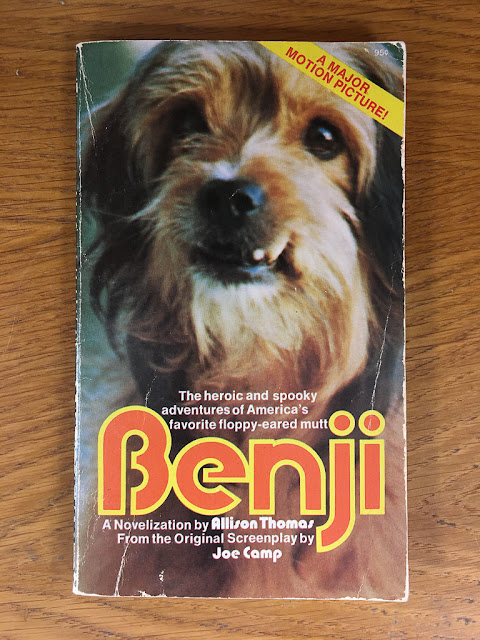 Yes, a vintage "Benji" novel, circa 1974! I hadn't thought of Benji in years. I loved those movies when I was a kid, especially "For the Love of Benji," and I had the book version of that one as a child. Funny because I hadn't thought of it in ages. Apparently there have been Benji sequels and remakes over the years, most recently in 2018 for Netflix, but none of them were on my radar. Anyway, I kept this book just for my own nostalgic enjoyment. Not that I will ever read it.

(We seem to be reminiscing a lot this week, don't we?)

I've been texting with my brother as I write this post. Apparently my mom is in the hospital in Jacksonville with fever and some infections. I'm not hopping on a plane yet -- she has dementia and is mostly sleeping, and I'm not sure either of us would gain much from me being there -- but this bears watching, given that she's 85. I told my brother I'd come and help him if he needs me. We'll see how this unfolds.
Posted by Steve Reed at 6:57 AM

I hope your mother is fine and recovering soon. I've never seen any Benji books or movies, though I've heard of them.

I was a little (I would have thought a lot) late for Benji.
Sorry to hear about your mother. It does sound a bit pointless to visit at the moment.
Much to say about Johnston but I will cop out with, not my country.

Sorry about your mom. But if she won't be aware you're there, perhaps not urgent to go just now.

I don't remember if I've ever seen a Benji movie - which is weird because that's right down my alley. It's entirely probable that I've seen all of them & don't remember.

Thinking of you & your mom. I agree that you would only need to go if your brother needs you.

I’ve never read a book on Beni nor have I ever watched a movie. I’ve heard about him though.

Sending good thoughts for your mom.

I, too, love the YinYang man. Very cool.

I don't think I ever saw a single Benji movie. Sorry to hear about your mom but things must.

Yes. Best to just wait and see how things unfold with your mother. At this point, going to see her is for your sake, not so much hers. When it's time, you will know.
But I'm sorry you're having to go through this.

The past is tapping you on the shoulder this week, isn't it?
Hope your Mom is comfortable and they can bring her relief from her infection.

I do think it's best to wait to see how things go with your mom and her declining health. I am so sorry that she's not well and is in the hospital. I hope things go well for her.
I have never read a Benji book or seen a Benji movie.

Ms. Moon is right...you'll go to her side for your sake, not hers. It's important. With my mom, there were so many ups and downs. We lived a lot closer. When it was the end, we knew. We all knew.

I never saw a Benji movie or read one of the books. I must be deprived of something or other.

That Benji is adorable and I love dogs. I do hope your Mom is okay. Enjoy your day, hugs, Edna B.

Yin/yang person is so well done.

Sorry to hear about your mother. Being sick these days is a very scary thing.
I hadn't thought about the Benji movies in ages.

I love the graffiti and the first thing I noticed was the great shadow effect on the legs. Sorry to hear about the situation with your mom. 🙏🏼

... or maybe that should be shadow AFFECT? That one still trips me up sometimes.

Hoping for improvement for your mom. Mine is 90 and increasingly fragile. It's sad to see. Benji! I remember that. There were so many dog themed books and movies back in the day.

Hope your mom gets good care and bounces back. I like yin yang man too. Very clever. I was just a bit too old myself for the Benji phenomenon and too young to have any children in the extended family to use as an excuse to see the movie :)

I hope your mom rallies and will be back in her home soon. If you need to go to her, you will know. It's so hard when our parents reach this stage of life. And would you believe I never read or watched Benji???

Sending all good wishes for the recovery of your mom. That's hard, being so far away and just not knowing when the right time is to return.

I like Horowitz's Hawthorne and adult mysteries -- I don't know his youth books. Pity about Boris...

So sorry about your mom. Thanks for the kind thoughts sent my way.

River: Benji was very much a '70s phenomenon, but he was HUGE in the states for a while.

Andrew: I'm no fan of Boris, believe me, mostly because of all his duplicity surrounding Brexit.

Boud: I think she'd be momentarily aware, but the minute I left the room she'd forget.

Bug: Well, I don't know how much of a movie-goer you were as a kid, but I bet you saw at least one of them. I remember lots of kids at school having Benji folders and notebooks and whatnot.

Ed: Well, at least you know who he is! That's something! (I'm sure there have actually been many Benjis over the years, as the franchise has outlasted the life span of any single dog.)

Bob: It's creative, though I'm not sure what it's supposed to say. If anything.

Ms Moon: Thank you. I HOPE I know when I need to go and when not to.

Ellen D: It really is! Funny how that happens.

Robin: It sounds like she's doing OK, thank goodness. It was wise to wait.

Debby: It's just hard being so far away and knowing that even if I move quickly, it would probably be 24 hours before I could be there.

Red: Well, I'm not sure you're THAT deprived. LOL!

Edna: Benji was a very cute dog. I had a dog at the time named Herman who looked similar.

Wilma: It does show a degree of artistic ability, doesn't it?

Sharon: I just hope she doesn't get Covid in the hospital. She doesn't need that on top of everything else.

Kelly: The shadow effect (and it IS effect!) is what caught my eye too.

Margaret: Benji was the next big dog star after Lassie, I suppose!

Jenny-O: I'm sure they're terrible movies. I don't know what it would be like to see one as an adult.

Jeanie: I haven't read his adult mysteries. I didn't even know he wrote adult mysteries, to be honest! He has a kid's series called Alex Rider that the kids love.

Mage: And thanks for YOUR kind thoughts, too!