Dinner on a Train 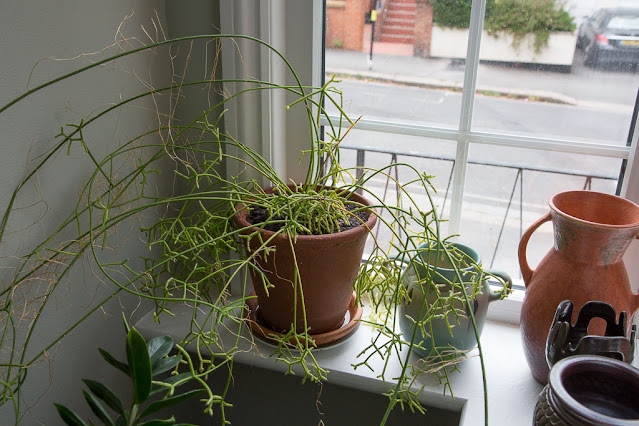 This was one of my household projects yesterday -- repotting my Rhipsalis, or bird's-foot cactus. This poor neglected plant lives in the front window of our flat next to my grandmother's old Roseville vases. It's kind of a family heirloom itself, having been grown from a cutting taken from a cactus I had back in Florida that was decades old. (It was originally given to me when I was a child by a woman who took care of me after school. She was a plant maven herself and passed on that love to me.)

Anyway, I water it once a week but that's about the only care it's received in years, and it's been looking a little yellowy lately. It also didn't bloom this spring. I discovered it was badly rootbound and bone-dry, so I put it in a new and larger pot with some fresh compost. Hopefully it will be happier. 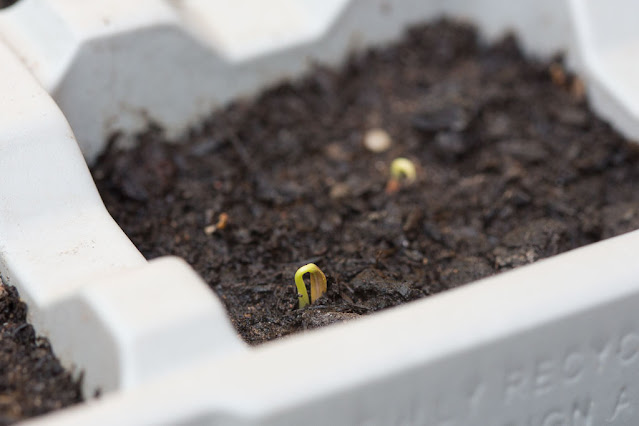 And look! My datura, or jimsonweed, seeds are coming up! You might remember last year I bought a packet of seeds, and only one sprouted. That plant grew and produced seeds of its own, and I dutifully gathered them not knowing whether they'd even be fertile. I planted them a week or ten days ago and now I count seven seedlings so far. What am I going to do with all these daturas?!

Maybe the ones I bought originally just weren't very fresh. Hard to say!

I feel like I have to at least mention yesterday's momentous news about Roe, but I'm not going to talk about it much. You know how I feel. All I'll say is the decision just sickens me. I also don't think it's going to satisfy the religious extremists, who are now going to make the blue, pro-choice states their battlegrounds -- along with targeting many of our other rights like contraception and same-sex marriage. How did the United States become a theocracy? 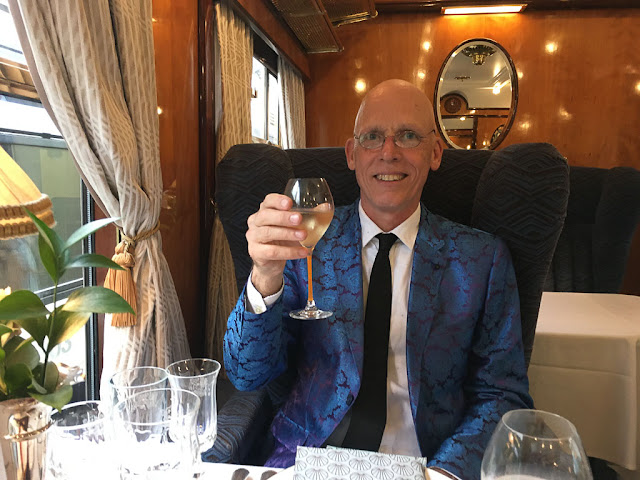 Yes! That's me. I never blog photos of myself but this is a special occasion. Dave and I celebrated his birthday last night with a chef-prepared dinner aboard a vintage British Pullman train rolling through the countryside. It was quite a schmancy affair, and as you can see, I wore the jacket. (With that tie it made me feel a little bit like one of the Four Seasons.) 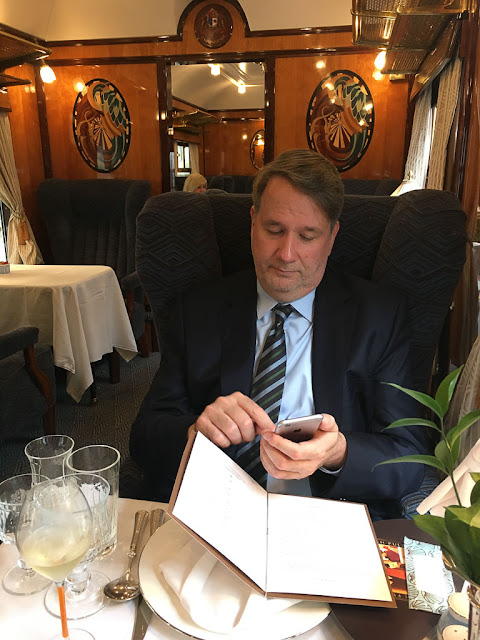 And here's Dave, obsessively Facebooking as is his wont. You can see the interior of our carriage, which was called "Phoenix," so named because it was apparently heavily refurbished after a fire in the 1930s. It was later supposedly part of the royal train and the favorite car of the Queen Mother. The servers emphasized that we really must check out the scrupulously clean and ornately tiled loo and, in fact, take pictures of the floor. So I did: 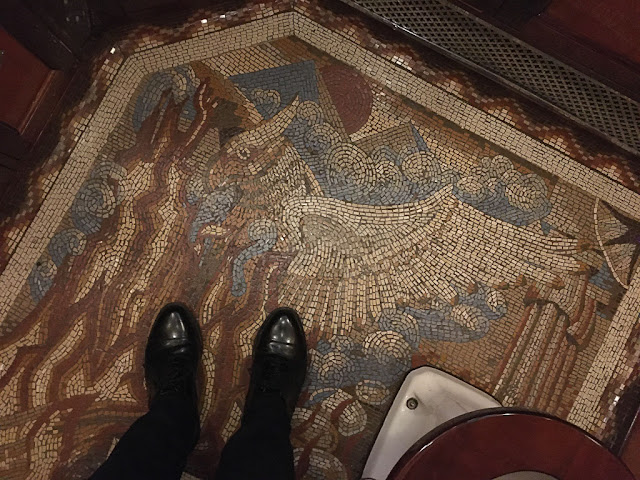 It was a fun evening. We chatted with the couple at the table across the aisle -- Erika and Neil, who work in hospitality recruitment blah blah blah -- and we drank a lot of champagne. Holy cow.

While rolling through suburbia, we were looking out the windows and enjoying the views of passing houses when we suddenly saw a man standing deliberately in his own window, apparently naked, facing the train. We couldn't see everything because the window sash came up to just the right height. "He's performing," said Dave. "That's fantastic!"

An impressive venue for a celebration..and that mosaic, stunning!
When you look at modern trains...

It is an achievement to have older plants. Well done!

Don't you scrub up well!! I love the jacket.
Where did the train go to and from? (You are lucky they weren't on strike)

That's a stunning carriage. The naked man in the window seems a bit odd. but I guess that's how he gets his fun.

You always give me so much to comment on. I’ll try to be brief. The jacket reminds me of my bar mitzvah tux (except mine was brocade). I want that tile floor. So great to see photos of you both. Happy birthday belatedly, Dave. You should have a sign made for your garden that says, “What am I going to do with all these...?”

What I would really like to know is how you attached that oval mirror to the side of your head. Was it superglue?

Sounds like a great evening. I'd never heard of dinner on a train as an event before. Happy birthday to Dave. Nice to meet you both.

Dinner AND a show! How fun!

Sounds like a fun experience. Great photos of you and Dave and I love your jacket. The whole thing sounds quite memorable. Happy Birthday to Dave. I hope the food was good!

I love that jacket and you look very stylish. My father was a pathologist and dealt with death so he abhorred the color black (I know, not really a color but the lack of light) and while he did have a few black suits he also had an emerald green one, a peacock blue one, a canary yellow one, and a burnt orange one.

As for the SC and their attempt at legislating their religious beliefs and Thomas actually mentioning going after contraception and same sex marriage as well, you'll notice that he did not mention going after interracial marriage as well which has been against the law in this country for far longer than it hasn't.

Happy Birthday to Dave. And I love seeing your smiling face (and Dave's mostly top of head!). Makes you "real"! It looks like a gorgeous train and wonderful and very elegant experience. I'll have to google that. How fun to see the views (including the "performer"!) and enjoy a lovely dinner in such a beautiful environment. Big happy.

That's a good way to set off yesterday's bad news. Equally scary, the implications it has on other key human rights issues. Time to get active again and turn the Senate and hold the house so we can codify Roe into law.

Such a lovely birthday celebration. You both look absolutely dashing.
I love that you have such an old plant. I hope that it recovers. It's been around a long, long time.

I love your jacket and think you look festive and fabulous in it! What a terrific way to celebrate Dave's birthday in the lovely train car! Hope Dave had a wonderful day and he has a happy year filled with fun adventures with you and Olga!

fantastic jacket and you wear it so well!

What a fabulous way to celebrate!! You both look so handsome. 😊 I love that floor mosaic, too.

A belated happy birthday to Dave!

Gentlemen, cheers! Fabulous in every way- lucky you arrived just in time for the performance, too!

Happy Birthday to Dave! You both look so dapper and I LOVE your jacket. There used to be a dinner train in my area; it had great food and ambiance but couldn't stay in business for some reason. I can't talk much about Roe either. I start to hyperventilate.

Oh my gosh, ya'll are fabulous! What a fun and celebratory thing to do! Thank you for the photos --

What a great birthday celebration. The jacket was a nice touch to add to the festive vibe. I do love old restrooms, there is one in Pueblo, CO that is just a work of art; old wood, tile, paintings.

You both look so dashing! What a posh way to celebrate Dave's birthday!
I have a plant I brought from CA to CO ... can't recall just how many years I had it in CA, but in CO, it's been ... OMG ... 18 years! It's some kind of a philodendron, I think. Quite hardy!

What a great thing to do in celebration of a birthday. Of course you could guess I would thoroughly approve. And you got to see some performance art from the train window.

What a great idea for a birthday celebration! And I love trains! I think the photos of you and Dave on the train are great. And you got to witness a "show" as you traveled. I cannot believe the whole Roe v. Wade thing. It is a travesty.

Well, that was a fun birthday party. Awesome photo of you.

That coat is striking. But couldn't you have fitted it out with a finer shirt and tie? You and Dave look like a right proper pair of old codgers. But I envy you the train ride. AND the champagne!

What a great way to celebrate a birthday! One of my best memories is travelling on a dinner train through fall foliage in Quebec when I was at a conference many years ago. It was really magical. That jacket looks sharp on you! And maybe the man at the window happened to be wearing low-rise trousers or short pants and had his shirt off because he was hot (the temperature kind of hot, lol).

You look great in that jacket! It looks like a lovely time - what a creative way to celebrate Dave's birthday.

I enjoyed the photos of you and Dave. So glad you're enjoying yourselves. Hugs, Edna B,