From Bruges to Brussels to London 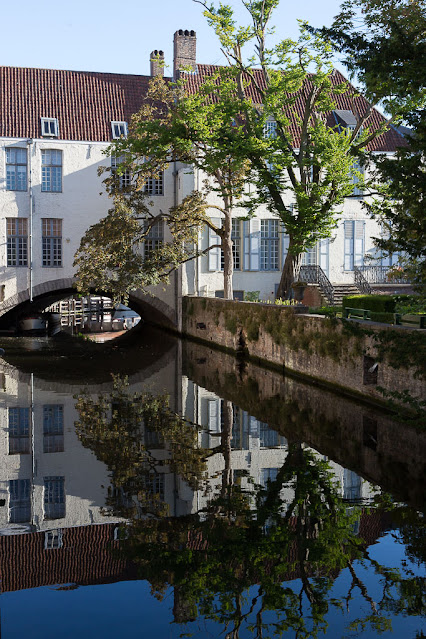 I woke up early yesterday morning in Bruges and went for another walk, this time to the Bonifacius Bridge, which I'd seen on the previous day's walking tour. For some reason this bridge is considered a particularly scenic spot, and it is perpetually mobbed with people. I got there early enough to catch it without any crowds, which made for some nice pictures -- although I preferred the one above of surrounding buildings taken while standing on the bridge itself.

Then I went back to the hotel, got cleaned up, had breakfast and checked out. I left my bag at reception and walked to the Groeninge Museum, to see its remarkable collection of Flemish art. 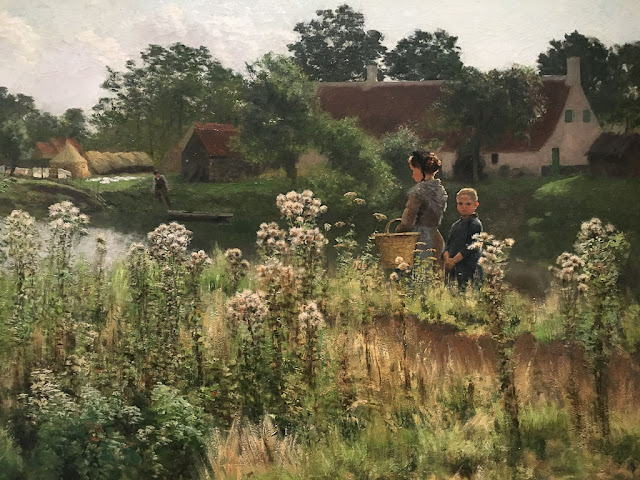 The collection spans a wide range of time, from the Middle Ages to the modern era, and includes artists such as Jan van Eyck, Hans Memling, Pieter Bruegel I, Hieronymus Bosch and others. Here's one of my favorite paintings -- "The River Lys at Astene (The Thistles)," by Emile Claus, from around 1885.

And check out this woman, who was in a huge crowd depicted in Bruegel's "The Sermon of St. John the Baptist," from the early 1600's: 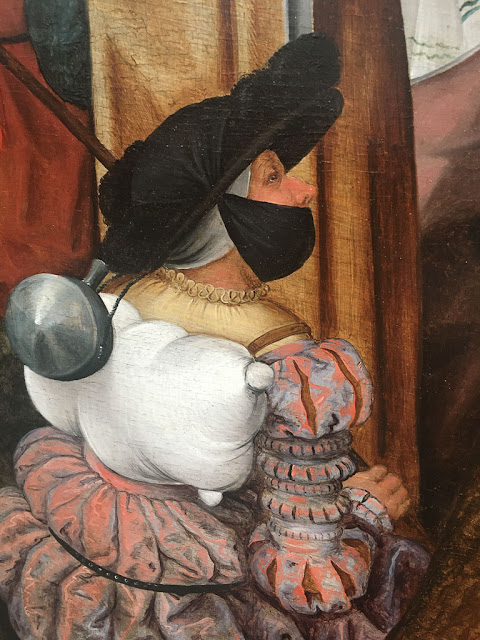 She was way ahead of her time! (Though, as Dave said when I showed him this picture, "She's wearing it below her nose.") She was the only one in the entire painting in a mask. I wonder if she's a baker or miller or someone who worked around a lot of dust. Maybe that's a sack of flour on her back?

Anyway, I was happy I had a chance to see the museum. I walked back to the main square for a final cup of coffee, and then made my way to the train station. 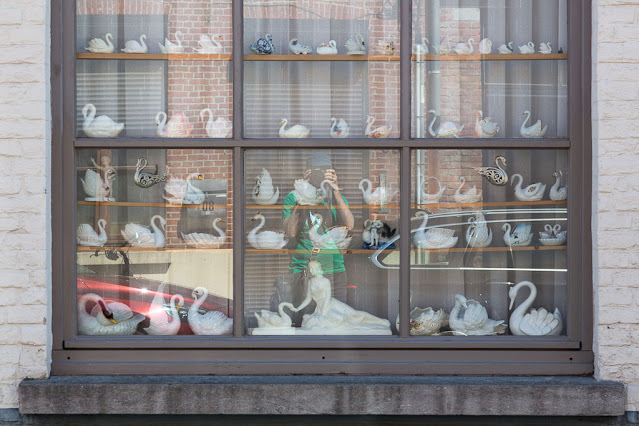 Let's call this "Self-portrait with Swans." There was no way to take the picture and stay invisible, so why not embrace the reflection?

I got on the train and headed back to Brussels, where I still had several hours to kill before catching the Eurostar back to London. I walked into the old part of town for some quick sightseeing. Brussels is undergoing several huge construction projects, particularly along the Avenue de Stalingrad, and there were huge bleachers either being set up or dismantled for some event in the Grand Place -- so there was a lot of chaos. But at least this time I didn't get assaulted. 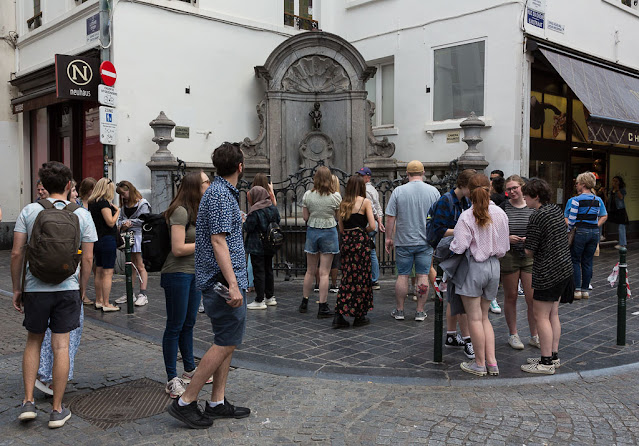 I said hello to the Manneken Pis, the fountain of the pissing cherub that is the Mona Lisa of Brussels. (In other words, the city's must-see attraction.) 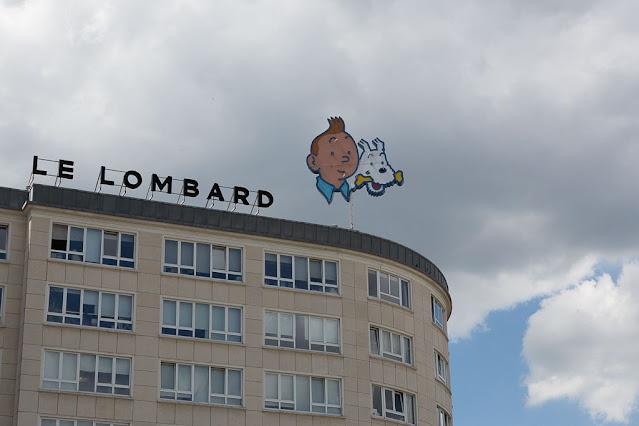 I spotted Tintin and his dog Snowy (or Milou in French) overlooking the city from this high rooftop. The author of the Tintin comics, Hergé, was from Brussels.

By this time I had about an hour before my train left, so I hoofed it back to the station, went through passport control and security and spent my last Euros on a bottle of Belgian beer for Dave. The trip was uneventful and I was back in our garden with Dave and Olga by about 5:30 p.m. 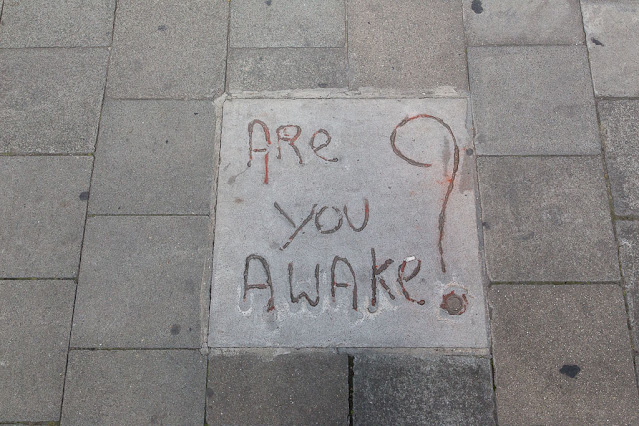 A bit of Brussels sidewalk philosophy! I'm awake now, but I sure slept like a log last night.
Posted by Steve Reed at 7:38 AM

The photo from the bridge is a beauty. I’d love that museum. And seeing Manneken Pis brings memories of my time in Brussels. I can picture myself standing there one night with my best friend and my cousin, and hardly anyone else around. Two lifetimes ago.

What a marvelous trip. And to come home to Dave and Olga, perfect!

I like the mirror image reflection in that first photo. There is a way to take that photo without your reflection, stand back and off to the side just enough so you are not reflected, then zoom in.
I like Heironymus Bosch paintings.

"The River Lys at Astene (The Thistles)," by Emile Claus is indeed a lovely work of art. The light has been captured so skilfully. However, I prefer the work of Emile's father... Santa.

There's a lot to like about Belgium incl. TV series. We've just finished watching Two Summers on Netflix - not sure if it's on UK/US Netflix - but we were hooked.

The sermon woman is not wearing her Covid protection mask properly.

I did get a snap of Tin Tin from outside Brussels Midi but we never saw Manneken Pis. I don't remember Snowy. Your photo looks different to mine.

Wow about your assault story. I see your point about spending a day in a police station, but it would have been good to have reported it in some way.

Europe doesn't quite always work like e expect. Try taking photos of the ladies in the windows in Amsterdam and the police do not interfere with what happens to you.

Last year I visited both the Grand Canyon and Arches National Parks in the early morning hours before many were even eating breakfast. As I passed by on my way out of those parks with cars lined up for miles trying to get in, I knew that it had been well worth getting up early for.

Looks and sounds like a lovely trip, though I am still marveling at how you got out of your hotel.

It's just so amazing to this old American brain that you can be in a completely different country in less than six hours. It's so cool!
Good for you to taking advantage of time and geography to go off on such a nice little adventure! As you well know, it would take me more time to drive to Miami than it took you to get to Bruges.

Another lovely day - much better than my one time in Brussels (which I'll bet I relayed to you on your other Brussels post but I haven't looked yet). We were diverted there on my trip from the US to Zambia - I was supposed to land in London but it was too snowy/icy so we were sent to Brussels where I spent several hours in the airport. If I'd known we'd be there that long I would have gotten out & explored!

I love seeing these photos of your journey to Bruge. So beautiful there.
I clicked the link and read the old post about the assault. Wow. What a crazy experience that must have been. How someone could just run out of a building an assault a stranger for taking photos really surprises me. I guess crazy violent people are everywhere.

I do like that picture from the bridge. And the house built over the canal. That collection of swans reminds me of some of the estate sales I've been to.

"Self-portrait with Swans" - I like it! I had the same thought as Dave when I saw the woman in the mask in the painting.

Always nice to get home after being away a few days.

I had studied Flemish art in school so visiting the Groeninge Museum was a must for me. There were some outstanding paintings in that museum, two of which prompted me to do further research after I returned home. The painting you have pictured is beautiful.
You mentioned the crowds. When I went in the late 80's, there were tourists but not huge crowds. I've read that these days, it can get very crowded in the city especially during the summer months. I guess if I think about it, that is happening in many places around the world.

What a terrific getaway for you! You certainly packed in a lot of beauty and interesting sites! I liked your self-portrait with all of the swans! Delightful!

What I love about this is that you can just skip over to Belgium for a couple of days. I guess I can do that to Canada... but it's not quite the same, much as I prefer our neighbors to the north! The Flemish artists are among my favorites and to visit a museum heavy on their art would be a great treat for me. What a wonderful getaway!

I am so envious that you can take a train for a couple of days in Bruge. How cool is that. Here, it would be a major expedition to fly to get off of this continent.

That first picture is amazing! The painting is a poignant reminder, isn't it?

Mitchell: I've seen the Manneken Pis twice and both times it was mobbed! And both times I was left thinking, "Why?"

Boud: It is indeed good to be home.

River: I did do that, but then I got reflections of all the cars and buildings. It was just a function of the light, and I usually prefer to shoot things head-on anyway.

Sabine: I've found "Two Summers" and added it to our watchlist!

Andrew: When I was in Amsterdam it was made quite clear that the women in the Red Light District were not to be photographed. I think there were signs up, if I remember correctly.

Ed: Absolutely! Getting up early is the key to enjoying so many public spaces.

Ms Moon: Well, in fairness, Miami IS kind of a different country. (And I mean that in a complimentary way!) I bet flying to Cozumel wouldn't take you more than six hours, would it? Or maybe it would if you need to connect somewhere else.

Bug: It's hard to know what to do when you're catching a connecting flight. Leaving the airport always seems risky!

Robin: It was a crazy experience and one I will never forget. I think the guy was mentally ill.

Ellen: Apparently swans are a symbol for Bruges. They're all over the canals.

Kelly: As they say, the best part of traveling is coming home!

Sharon: Apparently they now get cruise ships docking at the port, and we all know how that transforms a town.

Ellen D: It's quite a collection of swans, isn't it?!

Jeanie: We are fortunate to have so much so close by. We need to take better advantage of it all.

Allison: Taking a train IS easier than flying, but it also involves a fair amount of arriving early and security and that kind of thing. I've never tried to check a bag on the Eurostar. I have no idea how that might complicate things.

Debby: That was virtually the only mask I saw the whole time I was in Bruges!

The mask below the nose-LOL. You had a great amount of time and a perfect blend of activities. Nice to be so close to such interesting places.