A Whirlwind with Anne Boleyn 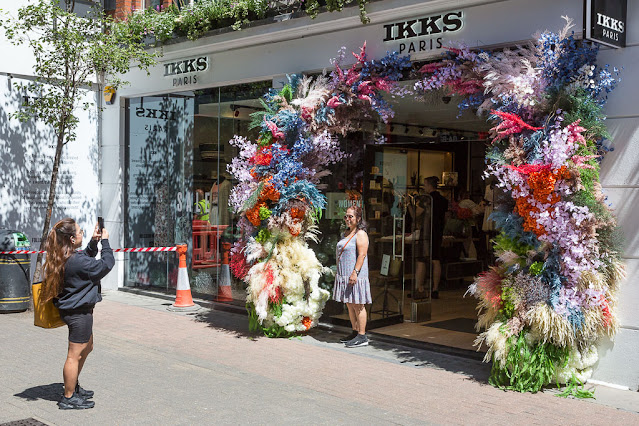 Well, things have become a bit crazy here over the last few days -- in a good way. First there was our train dinner, which I wrote about yesterday.

Then my friend Pam, from my Peace Corps days in the early '90s, came to town with her family and I spent the afternoon and evening with them yesterday. We went to a West End show ("Six," a pop musical about the wives of Henry VIII, which was really fun) and then out to dinner.* Pam's son Spencer scoped out a West African restaurant, which was perfect for us because Pam and I traveled in West Africa together in 1994. It turned out this particular restaurant only served a nine-course tasting menu, so dinner turned into a three-and-a-half-hour extravaganza, which was fine with me because I hadn't seen Pam's husband or kids in about 12 years. When I last saw them the kids were buzzing around their neighborhood on their bikes. Now her daughter's going to college! Christ.

And today, I'm off on a little journey of my own. An international train trip, to be exact. It's been years since I've taken a train anywhere outside the UK -- not since the pandemic -- so I'm excited. I'm meeting a former co-worker who's been doing some traveling of her own while Dave happily stays home with Olga. And on that note, I've got to go pack. I'll be coming to you tomorrow from my mystery destination!

* I am adding a late addendum to this post because I forgot to mention the most exciting part of the evening. We were walking from the theater to the restaurant when, about 30 feet ahead of us, we saw a guy in black wearing a balaclava and riding a bicycle smash the window of a Tesla and grab a gray suitcase from the back seat. He rode off with amazing speed and agility, considering he was carrying luggage, and it all happened so quickly that none of us could react. I gave a vague description to the police, but that's all we could do. I turned to Pam's kids and said, "Well, now you've had an urban moment!"

(Photo: Carnaby Street, on Wednesday.)
Posted by Steve Reed at 5:30 AM

Obviously, nothing icky about IKKS. But does that photo mean you’ll be writing from Paris?!?

A 9 course tasting menu? Sounds fabulous. What an evening. I love that floral wreath entrance.

This is exciting stuff. I gather Dave is much more a homebody than you. How cool that you give each other that space.

Your journey must begin with Eurostar. So it will be Paris, Brussels or Amsterdam where you visit, if they are not a kick off point to somewhere else.

You are such a tease Steve! My money is on Gay Paree.

I'm leaning Paris, too, because I don't think IKKS is much of a destination.

I love long meals and catch up! Can't wait to see where you wind up...and are you taking that very cool jacket?

So I take it you did not attend the Rolling Stones concert at Hyde Park? Darn. Looks like it was a good one.
But adventures abound! I'm so glad you're getting out and about and seeing old friends. Terrific!

Oh wow, I'm so excited for you and I can't wait to see where you are off to. Have a great time.

How nice to gather with old friends like that. Enjoy your journey, Steve. I'm looking forward to seeing the photos and reading about where you're headed.

Looks like "living with covid" is a happening deal. Just get on with it - live a little, or a lot! Your evening sounds fabulous. You are probably going to pop over to Paris, easiest day trip- exciting!

Getting together with friends and having mystery adventures/trips--you are doing summer right!

Wow... are those fresh flowers in the photo? They sure wouldn't last in our heat.

I'm looking forward to whatever journey you're going to take us on!

Can’t wait to see where?

Ooo - very exciting! Hope you had a fabulous time!

Well, now I'm curious. Where in the world is Steve?

I read some of your writing about Africa, it must have been quite interesting. My middle daughter did an internship there nine years ago already, wow. She was in Zambia and I imagine it opened her eyes. She did end up with malaria though, poor thing.

Hope you have a lovely trip.

Mitchell: I didn't even think about the Paris reference!

River: It was a very eye-catching doorway!

Boud: Yeah, Dave prefers to stay home, and honestly it works out well for the dog!

Andrew: You are correct!

YP: I had to build some suspense! LOL

Bob: It's a terrible name for a shop, isn't it?

Ms Moon: Actually, I only heard about the Stones yesterday, so no, I didn't go. I'm late to everything. LOL

Robin: It was great to see them again, especially the kids. I used to hate it when I was little and adults would say "My, how you've grown!" But now I find myself saying it!

Linda Sue: Indeed. I haven't seen a single mask on this trip.

Ellen: It was different, and parts of it were good. I wasn't blown away, though.

Kelly: No, I'm sure they're artificial. I didn't touch them but I can't imagine they redo them every day!

Red: That was my goal!

Janie: Ha! I'm like a bald Waldo. No striped shirt, though.

Pixie: Malaria is a rite of passage in Africa, sad to say, even if you're on the antimalarial drugs. I went to Zambia on a later trip, but only barely -- crossed the border from Zimbabwe to see Victoria Falls from the other side.

As urban moments go, that's kind of a big one! I've heard good things about "Six" (or rather, read them) and now I'm glad to hear the same from someone I "know" who actually saw it!