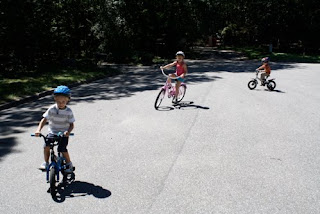 During my long car-less period in Manhattan, I forgot what it's like to drive in traffic. I know that sounds silly, since traffic is a daily frustration in Manhattan, but I never took cars there. I bet I rode in a cab twice a year.

Now that I have Florence, I'm reacquainting myself with traffic. The route I take to work usually isn't congested by the time I set out, so most days my commute isn't crazy. But Saturday's drive back from Southampton was a lesson in traffic.

The east end of Long Island during the summer is insane. The roads are narrow, two-laned and designed for country driving, not hordes of shiny Escalades and Jaguars. So even before I left, I was dealing with packed roadways. (Fortunately, Florence is pretty small, and can zip into parking spaces that Escalades couldn't consider.)

On the way back, an accident on the Sunrise Highway brought traffic to a dead stop near the town of Bohemia. I sat amid a sweltering sea of cars for maybe half an hour before I noticed that people were driving through a gap in a fence up ahead to get to an access road beside the highway. The procedure looked pretty dangerous, but I did it anyway. Thus freed from the "parking lot," I found an alternate route with the help of my trusty iPhone. (Unfortunately I had to get around a huge park. I've always been a supporter of parks, but at that particular moment I wanted to pave a road through the middle of it.) Anyway, I was back on the road after an hour or so's delay.

That didn't end the traffic, though. The Belt Parkway through Brooklyn was also heavy with cars. I guess everyone was out because it was such a nice day. Fortunately these cars were moving, and at one point, when I crested a rise near Coney Island, I was struck by how beautiful those shiny rivers of cars could be.

I crossed the Verrazano Narrows Bridge, which gave me a spectacular view of Manhattan and New York Harbor. Pretty cool!

It took me about four hours to get home -- not entirely unpleasant, and certainly an adventure.

(Photo: Pam's kids created their own version of traffic, playing follow-the-leader on bicycles with a neighborhood pal.)
Posted by Steve Reed at 4:15 AM

I hate driving in heavy traffic, especially when there are lots of lanes. Don't think I'd cope at all well in Manhattan :(

Oh that traffic was a simple as that top photo! I have an entirely new appreciation for traffic after my time in Bangkok. It is so aggravating to be interminably stalled and not even know why, yes? Good work for getting out of one jam on your trip home. The iPhone does come in handy. Even overseas we were singing its praises.

Did I miss out on why your car is called Florence?

I know - I think I missed Florence's naming ceremony too :)

Clue me in, why call your car Florence?

I am just catching up with your news... Congratulations on the full time work and Florence is just so cute.

Funny, if there was a paved road through the middle of the park it would have loads of traffic on it and loads of those pesky park users unpacking their picnic and rec. gear

I was tires from work the other day and had to be back relatively early so I took a cab from the PATH at World Trade back to Gramercy. Then it struck me I hadn't been in a cab in probably 6 months or longer. It's a little known subculture, I think, of NY'ers who don't take cabs.