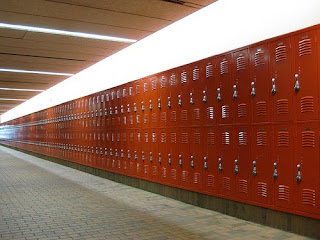 Dave and I are setting out bright and early this morning for New Jersey. We've had fun on this trip, but as always with vacations, we're looking forward to getting back to our home and our routines.

We drove through Grand Rapids on the way back to Detroit, so I could see Dave's former home turf. He lived there for six years or so, and showed me his old house as well as lots of local landmarks, like the giant Alexander Calder sculpture in the middle of downtown. Then we drove back across the state to stay with his family.

Dave's parents have been great to me and I've enjoyed their hospitality. Dave hoped they'd be more enthusiastic about our recent civil union -- we didn't get even a "congratulations" -- but given their religious background I feel very accepted. They're very good-natured with me and I've shared in family stories and discussions. I feel like we've been congratulated, at least as far as they're able. I was afraid my reception might be far chillier.

We've loaded the car with more of Dave's stored belongings, mostly kitchen stuff and CDs, which we (I) will organize when we get back to New Jersey. We also discarded a lot of his stuff here -- and stuff belonging to his former partner, and that partner's former partner -- which will become fodder for garage sales by his parents. Vintage Ricky Nelson LPs, anyone?

(Photo: Lockers at Western Michigan University in Kalamazoo.)
Posted by Steve Reed at 11:36 AM

My father was born in Grand Rapids.

I'm glad you have had such a good visit. I'm sure Dave's parents will be more enthusiastic with time, especially when they realize how happy the two of you are together. My parents had to warm up to the idea of a "mixed" marriage too (Jew-Protestant), but they eventually came around and were ultimately our biggest supporters. Religion gets in the way of a lot of things.

Have Ruby and Ernie had a good trip? I'm sure they are happy to be along for the ride this time.

Woo! I am so late to the party, but Congratulations and many years of happiness to you both. Happy news :D

Thanks, anonymous and Betty! :)

Barbara, religion DOES get in the way of a lot of things. I always try to stay positive about people's belief and remember that religion also fuels a lot of good, but sheesh, it can be a problem.