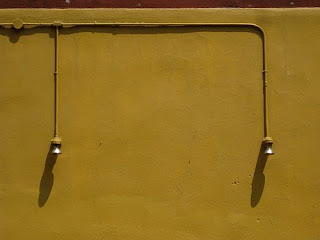 As you can probably tell from yesterday's post, I'm trying to be a little more conscientious about my Buddhist practice. I feel like I kind of ran off the rails after moving to New Jersey, with the Zendo so far away and my life in such a state of turmoil. Now that I seem to be easing back toward normalcy, I want to renew my sitting and read more dharma teachings.

I really enjoyed Dinty W. Moore's book "The Accidental Buddhist," from which I took yesterday's passage. Moore starts out on a journalistic project to examine American Buddhism, and in the process finds himself swept up in practicing. But throughout, he remains very casual about it all -- I mean, he's serious, but he doesn't seem to feel the need to memorize chants in Japanese or Sanskrit or to wear robes or stuff like that.

One of the chief hurdles I faced in my practice was a feeling that the robes, the chanting, the incense were all their own trappings -- that they became attachments in and of themselves, especially since they weren't really my culture. I understand the uniting purpose of the dharma name, the symbolic transformation it suggests, but it seemed a little silly at the same time. Why couldn't I just be Steve, practicing as Steve? If the essence of Buddhism is simplicity and awareness, weren't we complicating things unnecessarily?

My teacher would say that all those elements are just the traditional container of our practice -- and indeed the ceremony can be beautiful. But Moore suggests we're developing our own brand of Buddhism in America that's no less serious, just more American. That's an appealing idea, and in any case his book has helped motivate me!

Steve, I have been thinking about just this idea the past few weeks. Can I just follow the eight-fold path and leave it at that?

I remember doing a little speech in 8th grade about Buddha - I think it was for a book report. Wow, I have my opening sentence on the tip of my tongue... Hmmm...

I go to an Episcopal church and for a long time felt the same way about the "trappings." Then I figured out that for some people those were what led people into communion with God - they needed them so they could know that they were doing it right. I think as a person becomes more confident in what's right they don't need the trappings anymore - although they might enjoy them.