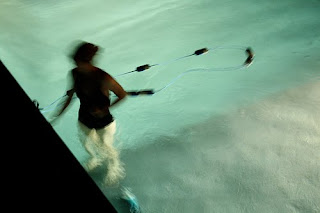 I had a great little mini-vacation in Southampton with my friend Pam and her kids. I drove out on Friday morning, and had a relatively effortless trip -- which surprised me, because I thought I might get caught up in New York rush hour traffic. I left early to avoid it, and apparently did! I enjoyed cruising along in my little car, my music on, the sunlight sparkling through the piece of cut lead crystal that hangs from my rearview mirror. (I call it my "disco ball.")

In Southampton I did a little of everything. Yesterday I picked up some Ina Garten cake mixes for Dave, and spent lots of time playing with Pam's kids and catching up with Pam. I hadn't been to see her there since January 2009, so we were long overdue for a visit. (Especially since she now lives in Boston. Her place in Southampton is a vacation home.) Before that, I think my last visit was July 2007 -- time flies!

I was fascinated by her swimming pool at night -- maybe because I'd had a few glasses of wine! It was fun to experiment with photographing the pool, and Pam in it. I actually really love the top picture. 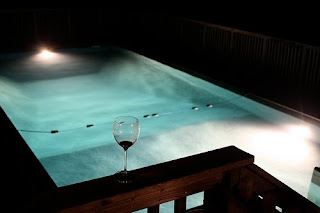 I also visited my friend Stuart, who lives near Sag Harbor (and who I visited in September 2008). Stuart recently bought a Porsche Carrera, and he took me for a spin. It was a blast. It was also a little insane. Every time he hit the gas, the force of the acceleration pushed me back into the seat and the blood rushed to (or from?) my head. I tried not to look at the speedometer.

(I took Stuart for a spin in Florence, too. I laughed at how well our cars expressed our personalities -- his thumping with a Madonna remix, mine crooning Johnny Mathis.)

I went running this morning, and was surprised to find it pretty effortless. It always surprises me how easily running comes when I'm in a new place -- I think my brain is distracted by new surroundings and not focusing on how much my heart is pounding! I ran on quiet, woodsy, hilly roads with lots of scenery, and the weather was cool and spectacular. I passed within a few feet of several deer.

Then Pam and the kids and I went to the beach -- a quiet little beach on Peconic Bay -- and also to Sag Harbor for brunch. Finally, back in the car and home again -- an ordeal that I will relate tomorrow!
Posted by Steve Reed at 1:49 AM

Great pool shots. I like the one with the wine glass that begs the question of whether the drinker went over the railing into the pool!

I'm glad you had a fun time away. Too bad Dave couldn't join you.

I want a Porsche!

You sure live life to the fullest. I admire your zest.

love the photos! the top one looks like someone jumping rope. your time away sounds divine.

Sounds like a fabulous visit. As you know, I LOVE the swimming pool pics.

So in a Porsche you can attain G-force speed? Wow.

Glad you had such a good time. I love that first shot too.

Dr. M is a lover of Johnny Mathis (although, curiously, the only CD we have of him is the Christmas one - It's a Marshmallow World in the Winter...).

Well, now you've given us a teaser. I'm glad you had a nice drive up & good time there since apparently the return wasn't so great.