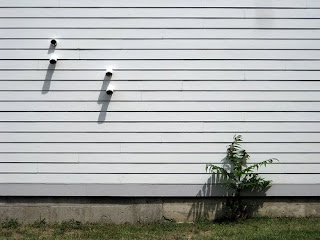 We got some bad news yesterday about Ruby, one of our boxers. You may remember that for several months now, she's had a swollen belly that appears to be filled with fluid. Definitely not a normal situation!

A recap: When we first took her to the vet, we were told she probably had cancer. But when the vet was unable to pinpoint any tumors by x-ray or ultrasound, or to find cellular evidence of cancer, we decided the swelling was probably a side effect of Ruby's arthritis medication. We decided to stop going to that vet, and just withdraw the medicine. Unfortunately, the swelling didn't subside.

We took her to a different vet a few weeks ago, and that vet suspected a steroid imbalance called Cushing's Disease. That diagnosis turned out to be incorrect, too.

Finally, after all our recent travels, we took her back to the second vet on Wednesday and again yesterday. They ran more tests, including a second ultrasound of her abdomen and, this time, her chest. They found a lime-sized tumor on her heart, perhaps a hemangiosarcoma, which has reduced her heart function and is growing inside the pericardial sac, which surrounds the heart.

The vet said this tumor will kill her, but he's not sure when. He suspects it will rupture and bleed, and she will probably collapse and die quickly. Meanwhile, she is in no pain and is unaware of the problem. She has slowed down a bit, but she still eats and runs and seems to enjoy life. While at Dave's parents' house several nights ago, she ate two huge steak bones!

So we've decided for the time being to just let her be. Hopefully the end will come as the vet suspects, and we'll be spared having to make a decision to end her life.

I'm sorry to hear this diagnosis, but I'm not surprised. When the swelling failed to subside after we withdrew her medicine, I had a feeling something serious was going on. What confounded me was the fact that she didn't behave like she was sick.

So, anyway, who knows how long she has. Weeks? Months? But what better way to go than quickly, unaware of impending death?

I'm sorry to hear about Ruby - but like you I hope that the end comes at the vet suggested it would. It's heartbreaking having to make decisions about pets.

Enjoy Ruby while she is with you. It's really fortunate that she is not in pain. It saves you the agonizing decision about ending her life. Cherish every day she has left. Maybe you should make her some really good dog food -- just sayin'. :)

I'm sorry to hear about Ruby. Here's hoping you're able to cherish the time you have with her, and thank goodness she has no idea how bittersweet these days are.

This reminds me of Atul Gawande's recent New Yorker article about end-of-life care. Too bad there's no canine equivalent of hospice!

So sorry to hear about Ruby.

Oh, that's so sad. Not sure I could do that but glad she's not in any pain.