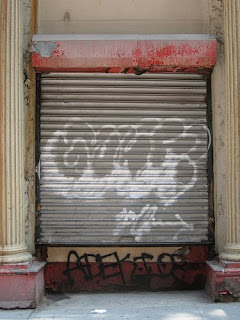 This rather nondescript graffiti is on the building near Ground Zero in New York that is slated to be torn down to make way for an Islamic cultural center.

In case you haven't been following this story, there's been a tremendous amount of controversy over the proposed construction of this center, which will include a mosque. Some people have argued that a mosque doesn't belong near Ground Zero, where so many lost their lives in 2001 to Muslim fanatics.

The proponents of the center, though, say that's exactly why it should go near Ground Zero -- to address Islamic fanaticism with a more moderate, reasoned approach that represents the vast majority of the world's Muslims.

There was a proposal to landmark the existing building in order to block the center, and that recently failed. (I gotta say, having seen the building, there's not a whole lot to recommend landmark status.)

On the wider issue, I side with the supporters of the Islamic center. I was as surprised as anyone when even the Anti-Defamation League, an organization devoted to fighting intolerance, came out in opposition to the center's placement near Ground Zero. (I suspect they were afraid of losing membership and financial backing if they decided otherwise.)

To my way of thinking, tolerance always wins. It may not win in the short term, and there are plenty who will seek the protection and benefits of a tolerant society while simultaneously working against it.

I'm aware that as a gay man, I would be treated pretty badly by many religious Muslims -- killed outright in some Muslim countries.

But I still believe that in the long run, the way to defeat extremism -- of all stripes, Muslim, Christian and otherwise -- is to accept and make room for all people, and model a tolerant society. By living it, we can show it is indeed the best way to live, which takes a lot of the appeal away from any extremist cause.

Muslims were obviously critical players in the events of 9/11, and those events were as much a tragedy and a disaster for moderate Islam as for the rest of us. Why shouldn't the Muslim community be able to address 9/11 and its ramifications at Ground Zero, and in their own way?
Posted by Steve Reed at 1:20 PM

i agree with you in every respect.

We have to always remind ourselves that not all Muslims are radical extremists. In fact, it's probably a pretty small percentage. I think it's a healing gesture to build a mosque there.

I agree too - hatred is never a healthy way to live.

That said, I could stand to be more tolerant of people who don't believe like I do. It's so much easier to make fun of tea partiers than it is to really listen to their concerns. Sigh.

There are at least two Muslims who believe there is more to building the "Ground Zero Mosque" than the professed motive of addressing "Islamic fanaticism with a more moderate, reasoned approach that represents the vast majority of the world's Muslims".

Sorry, the URL was truncated. Here is the URL split into two parts:

Daltyn: That's an interesting article. I do agree with the authors' point that there are better ways to spend $100 million -- such as caring for those in Darfur or Pakistan, as they point out.

I still think, though, that it is incumbent on Americans to show that we can set the standard for a tolerant society. Whether this proposed mosque is a deliberate provocation, as the authors of that article say, is immaterial to me. What IS material is our response. We can and should rise to the occasion.

And I disagree with the authors' characterization of "teary-eyed" liberals who speak from a perspective of guilt. I lived in a Muslim country for two years and I befriended many Muslims. I speak from first-hand knowledge about what Muslims want -- a secure and prosperous society in which to live and practice their faith. I have no reason to feel guilty, and I do not feel threatened by the presence of a mosque.