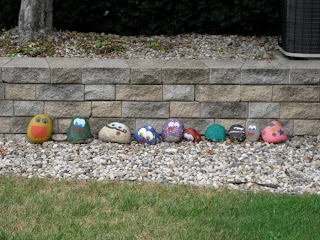 A long 11-hour drive brought us home again last night, much to our relief. It felt so good to drive up our street and into our parking lot, and to discover that our houseplants had weathered our absence and the apartment was just as we'd left it. After we unloaded the car and ordered some Chinese food, I made the best gin & tonic I've had in a long time. Ah, home!

There's not much to say about the drive itself. We stopped for lunch at another truck stop in Pennsylvania, where the buffet was loaded with beige food -- and red, red Jell-o. Fortunately I like canned sweet potatoes and fried chicken!

The dogs are happy to be home, too. Poor Ernie panted heavily for the last half of the drive, obviously stressed out. The back seat was partly loaded with stuff so he and Ruby didn't have as much space as usual, and I think he thoroughly hated being in the car that long. (Poor Ruby is off to the vet today for another look at her swollen abdomen, so she goes from one trauma to another.)

We had to come back from Michigan a day earlier than we'd originally planned because I need to be in New York today to sign a contract of sale for my apartment. Woo hoo! And then tomorrow I have a job interview. When it rains it pours!

My one regret is that I didn't get to visit my friends Ann and Greg in Pittsburgh, which I'd hoped to do on the return trip. We just ran out of time. They have three daughters who I haven't seen in many years, so I'll have to make another trip one of these days to catch up with them.

(Photo: Painted rocks near Dave's old condo in Portage, Michigan.)
Posted by Steve Reed at 11:11 AM

hallelujah for this good news!! gotta love the rain!

next time stop for lunch as casa mouse, i promise colorful, tasty food and even treats for the pups!!

p.s. the rocks crack me up!

There needs to be a penguin rock in there with all those others :)

Dr. M & I got home yesterday from our brief trip. We were relieved to see the house & garden in one piece. Well, except that the neighbor boys had broken our flag pole. We're not too made - they're cute kids who make regular errors in judgment - just like I did at their age (10).

Woo hoo is right on your apartment! Good luck on the interview.

I'm so glad to hear of your good fortune! Is the sale final? I hope the interview goes well. If you get the job, what will you be doing?

Sometimes we need to go away and come back to appreciate HOME. That gin & tonic would be nice right about now...