Checking on an Old Friend 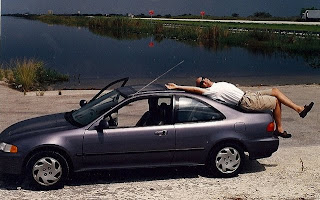 Buying my new Honda on Tuesday made me wonder about my old car -- my 1995 Honda, which I sold in 2000 when I moved from Florida to New York City. It was a dark purplish-gray Civic, and I lived in that car. I drove it all over Southwest Florida between Tampa and Fort Myers, and to Miami, Key West, Palm Beach, Lakeland, Orlando, Jacksonville. It was very reliable.

You've seen the commercials for Carfax, right? It's an online service that lets you buy a vehicle ownership report for any car, based on its Vehicle Identification Number. Well, it occurred to me that my brother, who sold my Honda on my behalf, wrote its VIN on the receipt, which I've saved all this time.

So I decided to buy a Carfax report for my old car, just to see what happened to it after I sold it. The results were pretty interesting!

I owned the car from November 1994, when I bought it new with just four miles on the odometer, to July 2000. By that time, I'd racked up 130,030 miles. I hadn't had any accidents. (Well, I did have one parking lot mishap that resulted in a dented fender -- long story -- but that was too minor to be shown on the report.)

I knew I wouldn't need a car in Manhattan, so my brother took it up to Jacksonville, where he lives, and sold it to a Michael Chapman for $3,000. This is where the report gets interesting, and a little misleading.

Carfax shows the car with a single owner from 1994 until 2005, which clearly isn't right since I sold it in 2000. (The report does indicate the title was updated in July 2000, presumably with Chapman's name. Carfax doesn't provide owner names.) Turns out there were two additional title updates between 2000 and 2005, so perhaps those were new owners, too. A new owner was officially noted by the DMV in October 2005, by which time the car had 210,000 miles on it.

In August 2006, the car gained another new owner, this time in north Georgia. It passed an emissions inspection there with 231,220 miles on the odometer.

Then, in September 2006, the car was in an accident. It apparently wasn't a very severe accident -- the report notes that it involved rear impact and "slight damage." The registration was renewed in Decatur, Ga., in August 2007.

And there, the trail ends. Who knows what happened after that? Maybe my beloved Honda was scrapped, or maybe it's still out there, with a registration that hasn't yet expired or is delinquent.

I'm glad to know the car had a lengthy life after I sold it, and that it apparently wasn't involved in any horrendous crashes. The Carfax report was $35, but I consider it money well spent to satisfy my curiosity.

(Photo: Me and my old Honda, crossing the Everglades in August 1995. My friend Kevin, who took this photo, captioned it: "My new car just lets me be free, so free!")
Posted by Steve Reed at 11:32 AM

I love this post! You tracked the history of your old car? How cool is that.

You look so perfectly at home on your old car.

What a great story!

We had a Mazda 323 that was so pathetic we were afraid to drive it in to trade it so we donated it to some organization. We forgot to get the tags off it, & apparently the organization sold the car with the tags in the trunk. So later that year we received a parking ticket in the mail. It amused us no end - our little blue car still alive & kicking! We were able to be amused because the organization took care of the ticket for us.

Dennis bought a little Datsun & drove it back and forth from CA to NY several times (by several routes) to a Mardi Gras celebration, ( years of Los Angeles freeway commuting and driving in the five boroughs, ) Weeks touring the Tetons and The Badlands, down to Biloxi & Key West, then out west to Taos, and into Mexico. Where did it end up finally? Dennis gave it to a friend and it lived out its final years in Paramus, New Jersey. If it hadn't been for the rust, it would have lasted more than 14 years. Those Datsuns were just incredible.