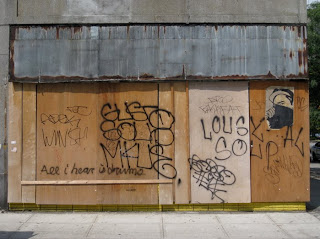 I went in yesterday to check out my new office and take the mandatory drug test required for employment. The newsroom is tiny -- a nest of about 10 desks, with a few more private offices for the executives. I don't think I've worked in such a small office since I began reporting in the late 1980s.

Although the whole operation is much smaller than my previous employer, I'm taking this job seriously, believe me. In fact, I'm a little nervous -- it's been ten years since I've been a feet-on-the-street reporter. It'll be an interesting, and perhaps challenging, experience to get back to my roots!

I also got to walk around the larger of the two towns I'll be covering. It seems like a nice place, with a cute downtown lined with antique stores and sandwich shops, and a town square with an imposing old courthouse.

Last night, Dave and I went to see the Drum Corps International quarter-finals, which were held in Indianapolis but simulcast live in selected movie theaters around the country. The various DCI corps competed for a slot in the finals, with judging based on their music, visual showmanship and overall effect. Some of the shows included those we saw live in June. Last night's performances began at 6:30 and went until 11 p.m.! We didn't get to the theater until about 7:30, and even that was a long night of marching band for me.

(Photo: No, this is not the town I'll be covering. It's New York's Lower East Side, last week.)
Posted by Steve Reed at 2:53 PM

The excitement of a new beginning. Very cool.

I'm glad you clarified the photo - I was a afraid it was a picture of your new office :)

I have another friend in Washington state who has recently started covering, um, human interest? stories for her local paper. Festivals, people who collect things, stuff like that. She's having a great time - it's been fun reading about her adventures.

I look forward to reading about yours too!

Dennis overgrooms himself when nervous.

(I'm looking forward to hearing all about the job, too.)