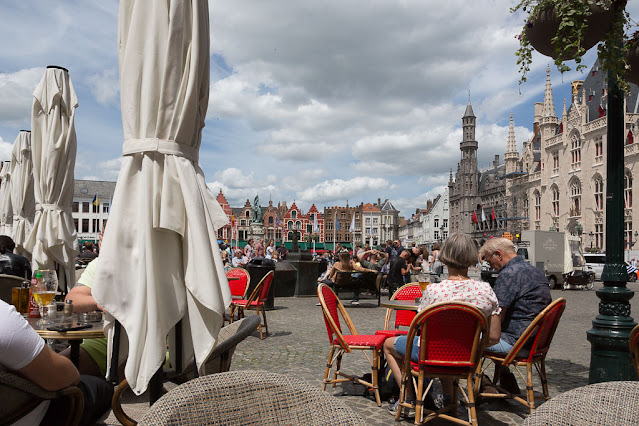 Paris was a good guess, especially given the I swear completely accidental reference in yesterday's photo! But no. That was a red herring. I'm in Bruges, Belgium.

I took a 9 a.m. Eurostar train from London to Brussels, and then caught a local train to Bruges. That turned out to be a little harder than I anticipated because none of the notice boards in the Brussels train station actually say Bruges. They just give the train's ultimate destination or the name of a station ("Sint P de Kokken" or something like that). So I had to ask around before I knew which train to catch. Anyway, I figured it out. Travel time, all told -- between three and four hours.

I had lunch on the big market square above, basking in the sun and surrounded by ornate peaked and crenellated buildings. I had a Leffe Ruby beer and croque monsieur at a cafe called De Vier Winden (The Four Winds, I presume). The name reminded me of an old motel we used to pass when I was a kid on our semi-annual drives up north to see my grandparents -- The Five Winds Lodge in Starke, Florida. I had to laugh that I was sitting in Bruges and thinking about Starke. 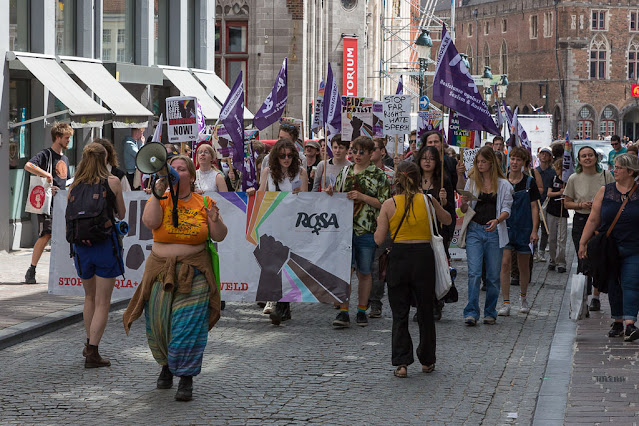 After lunch I took a little walk and happened to be in a vintage clothing store when this parade of protesters came by advocating for women's and LGBTQIA+ rights. "My body, my choice!" they yelled. I gave them some enthusiastic cheers and fist pumps, but the clerk at the clothing store was perplexed that they were protesting in Belgium about a shift in American abortion law. (Abortion is legal in Belgium.)

I kind of felt obligated to buy something after having that conversation, so I got a great shirt by Kenzo, which the clerk informed me was "a nice piece." 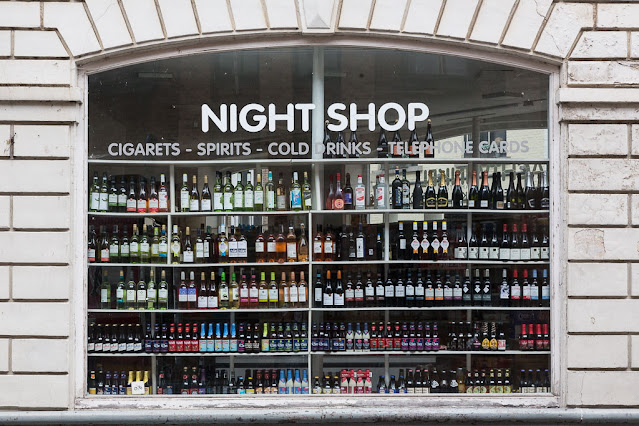 My former library co-worker Venisha is here in Bruges on a trip from the United States, so I met up with her and we strolled around town and took in some more sights. (And yes, a few more beers.) 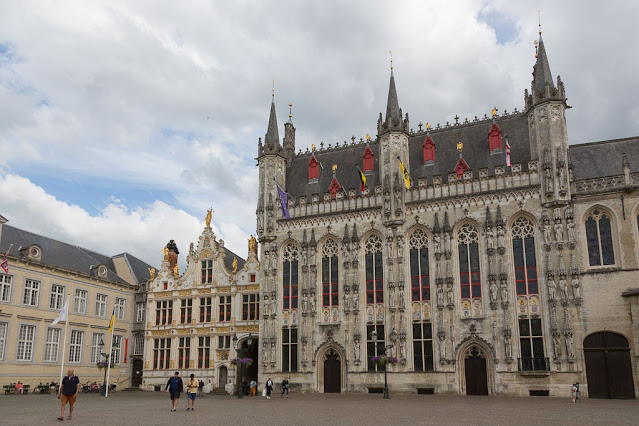 This is the Stadhuis, or Town Hall. 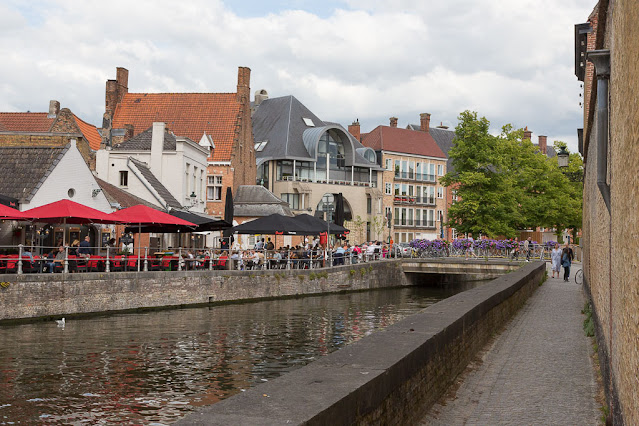 There are several canals winding through town. See those red chairs on the left? That's where we had dinner. I had moules frites, and I swear there must have been 60 mussels in the kettle they brought me. I also ordered a beer that came in the most ridiculous glass I've ever seen -- shaped like a gigantic bong, about a foot and a half high and held in a wooden stand. I felt like a frat boy on Bourbon Street. 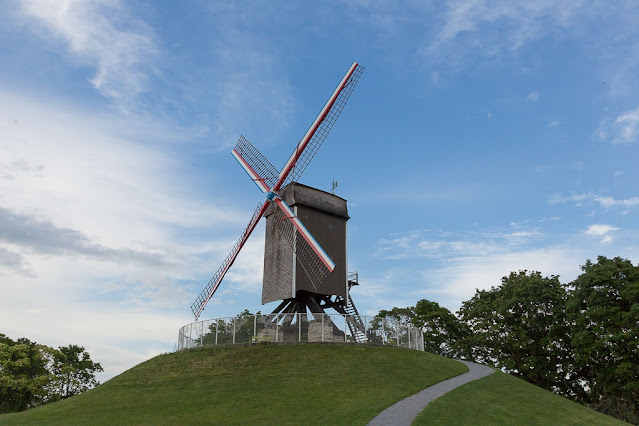 And of course there are windmills! Apparently the Netherlands does not have a monopoly on those. 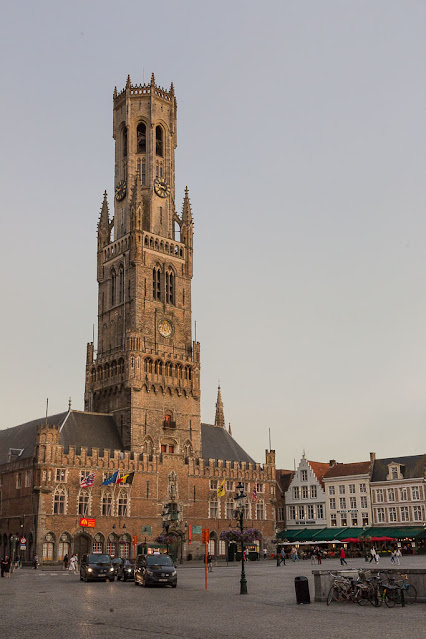 Here's the Belfort, or Belfry, completed in 1482. Apparently one can climb to the top, but I haven't done that. De Vier Winden, where I had lunch, is visible under the green awnings just to the right of the Belfort.

Today we're going on a walking tour where we will no doubt see more of these sights and get some more information about them all.

Oh -- my hotel -- that was an adventure. I reserved a perfectly nice room in a hotel called Martin's, right off the market square. But when I went back after wandering around with Venisha last night, I found that I couldn't get the air conditioner to turn on, and I couldn't get the bathroom light to turn off. I called reception and they said there was a switch at the bottom, but I swear there was no switch. I even took them a photo of the light fixture, and said, "Show me the switch!" So they upgraded me to a nicer room! I'm now in a room with a cathedral ceiling, a king-sized bed and a bathroom light that turns off. Sweet!
Posted by Steve Reed at 6:26 AM

Nice to see Bruges again.....we went there some years ago in the winter. It was bone chillingly cold, which rather spoilt the experience. Apparently the temp was either minus 10C or " felt like" minus 10!

Aha, do this is where you got to. You certainly keep your friends, from work and peace corps days, that's a talent. Enjoy Bruges!

Woo-Hoo! Upgrade!
Bruges is such a pretty place to look at, does it feel peaceful? It looks peaceful.

Bruges is looking good! Thanks for sharing the pictures. You "felt like" a frat boy? Don't worry, we won't tell Dave!

I said where on you went to after your destination of Paris, Brussels or Amsterdam. I didn't guess you would get off the train earlier.
Frat boy on Bourbon Street made me smile.
Good that you complained about your room and were upgraded.

I know exactly what you mean about the confusion of transferring from the Eurostar in Brussels to the train to Bruges. Ended up on the wrong train, had to get off in Ghent and change trains. It is very confusing. I was there just before Christmas time some years ago so the market square was filled with stalls and an (portable) ice skating rink. Well lit at night, so fun to walk around. One of my adult sons was with me and he did climb the tower. I took the easy way out and walked around town. Like you, we also enjoyed a wonderful meal of moules frites. Yum. A great excursion.

I tell myself in those situations that nobody knows me here and then proceed to drink my bong beer.

That windmill looks like a giant child's toy; I love it.
Nice little getaway you're having.

I'm pretty sure that Glen and his first wife live in Bruges when he played ball for Belgium. I have to say that sometimes I'm a little jealous I didn't get to share in that adventure.
Sure looks like a beautiful place.
I love your room story! Hurray for an upgrade!

I love seeing your photos of a place I know I will never visit. It looks like a wonderful journey there. Looking forward to more photos. And, very nice of the staff to upgrade your room. Yes, sweet!

I'm jealous once again. I visited Bruges in the late 80's and have always wanted to return and have never made it work. I thought Bruges was such a beautifully preserved city, picturesque at every turn. And, don't even get me started on the Chocolates! Have fun!

Europe is so different, four hours and in you're in Bruges, which I would love to vist; four hours here and you're still in the same province. One day, maybe:)

Have a wonderful trip, the photos are fantastic.

Wow! That's amazing! I am enjoying your photos and hope you have a terrific time. Don't forget to show us a pic of your new shirt and maybe also the beer bong! :)

I can't get over a four hour trip and you're in a different country. That's amazing to me. It would be a wonderful thing to be able to run off for 'small adventures' like that.

What fun! That looks like a lovely adventure. Your room situation reminded me of the time I had a fridge in my hotel room that buzzed VERY LOUDLY. Oof.

You either run into interesting sights or are terribly lucky and stumble on them. Enjoy your tour.

Don't miss out on chocolates. There are cafés that offer sample plates before you order, enough for a family of five. Also now you have to watch "In Bruges", the movie or at least the tower scene. I am sure it's on YouTube.

How do you drink out of a glass that's 18" tall? Must be awkward. I do envy your ability to just hop on a train and get to another country in a matter of hours. And not just one country but many.

"that's what hell is, the rest of eternity spent in Bruges" or " if I grew up on a farm and was retarded , Bruges might impress me, but I wasn't and it doesn't" ...Great get away from the city and it does not look terribly crowded right now. Great little holiday, Steve! WAY better than dumb ol' Paris...Love the march by the clothing shop even thought they are a zillion light years away and out of american
BS. Same sex marriage is on the agenda- rights being removed one by one. Bid a fond farewell to the country you once knew.

I visited Brussels decades ago, but not Bruges. Wonderful architecture! I think the bong beer sounds fun!

What a fun mini-holiday!

I'm enjoying all the photos. I've never seen or heard of a birds foot cactus. Where do they come from? Enjoy your day, hugs, Edna B.

I too am so envious of your ability to get on high speed rail and travel to another country in a matter of hours, that is so cool. We do miss Europe, sigh.....

Belgium has such gorgeous architecture and I love their beer. I would have ordered exactly what you did!

What a wonderful trip. Thanks for sharing it with us.

I somehow missed this post yesterday. What a great adventure, and city. I’d love to be there again. How cool that you have a bathroom light that turns off. I’ll have to splurge the next time I travel.

John: It IS a beautiful place!

Frances: Oh my. Hard to imagine it being that cold there, although I was in Amsterdam one February and that was an icy trip!

Boud: I used to be MUCH BETTER at staying in touch with people. I've actually gotten lazy about it in recent years.

River: It did feel peaceful. There were quite a few visitors but not enough to make it unpleasant. I think it CAN be unpleasant at the height of tourist season.

Andrew: No, you were right! I went to Brussels first, and then on to Bruges.

Mary: Well, at least Ghent was in the right direction!

Bob: It was terrific!

Ms Moon: Belgium gets a bum rap from a lot of travelers but I love it.

Robin: I was so dumbfounded by the offer of the upgrade I initially refused it. I had to talk myself into it!

Sharon: I think it might be one of my favorite cities.

Pixie: Yeah, we definitely don't have those wide-open western spaces! But they have their advantages, too.

Ellen D: I have pictures of both but I'm really trying to not make my posts too long!

Debby: It's pretty amazing and we don't do it enough.

Bug: Oh, THAT would be annoying. I hope they upgraded you too!

Red: This is the kind of place where you can just wander and see interesting things.

Sabine: Oh, believe me, I sampled the chocolates! In fact I bought a deluxe box to bring back to Dave.

Ellen: OK, I might be exaggerating slightly. Maybe it was 14" or 15" tall. Still a nightmare.

Kelly: Brussels is much grittier -- a true city, with all the attendant urban ills. Bruges is quieter and cleaner.

Wilma: It has been fun!

Edna: I think they're South American? They go by different common names but if you look for Rhipsalis you might be able to order one online.

Jim: It is an amazing feature of living here and we need to do it more.

Margaret: When in Rome!

Mage: You are welcome, and I'm glad you're enjoying it!

Sometimes it pays to complain! What a lovely city -- I've heard people say Bruges is one of their favorites -- I'm beginning to see why!