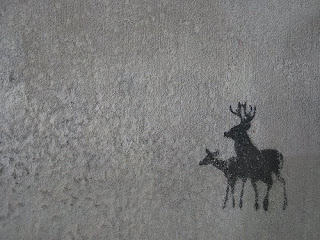 The retreat center where I stayed last week is an old Victorian house (much modernized) that overlooks a sloping field, edged by a forest of trees. The house has a big front porch where we would sit between meditation sessions.

On sesshin, reading or talking is discouraged. So rest periods were remarkably peaceful, as several of us sat together on the porch, watching deer and wild turkeys wandering around in the field. It was such an unusual feeling to sit for an hour or two with no agenda, not meditating or talking and not absorbing media into my brain. One afternoon I watched a hawk dive-bombing a turkey, which fought back successfully -- it was pretty amazing.

My family owns similar property in West Virginia -- an old farmhouse purchased in the 1950s by my grandparents, where grandfather would go on weekends to escape the urban confines of Washington, D.C. He ostensibly went there partly to hunt, but apparently didn't shoot much of anything. He mostly sat around and read dime-store paperbacks by the likes of Erle Stanley Gardner.

That house, in a community near Martinsburg called Sleepy Creek, sits above a sloping field bordered by trees. Grandfather often sat on the porch watching over that field. He was a stolid Presbyterian, but it occurred to me on my retreat that he was really having his own Zen moments there, leaving the pressure of city and family behind, living momentarily with only the creatures in the field. He and I were having the same experience, separated by hundreds of miles and several decades. An interesting parallel!