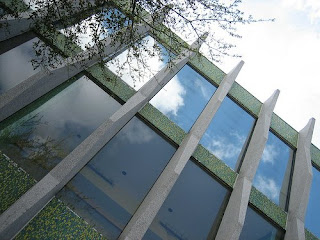 When I went to Jacksonville, Fla., to visit my brother in early 2006, I took these photos of the old downtown library building. The library, in all its concrete and glass-tiled glory, is quite clearly a product of the 1960s and had fallen out of favor. It was the subject of a pitched battle in the city's preservation community, between those who wanted to keep it and those who wanted to see it torn down.

The vacant building is still standing, apparently in a limbo brought about by the real estate downturn, despite redevelopment plans. But I don't doubt there are plenty of people who would still like to see it go.

Unfortunately, many of our towns, cities and citizens have decided they can do without mid-century architecture. Modernist houses from the 1950s are routinely torn down -- especially if they're on a desirable lot, on the water, for example -- to make way for ostentatious McMansions. The low-slung modernist style, with its planes of glass and concrete, stone and terrazzo, emphasized blending in with the environment, unlike today's houses which tend to dominate the land on which they stand. 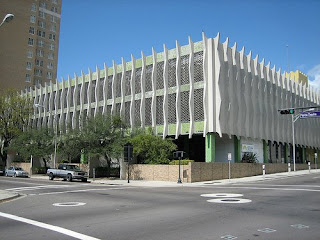 These are the kinds of buildings I grew up in. I went to a library not unlike this one, with colorful cushions piled on the carpeted floor in the children's reading nook -- very '70s. The Jacksonville library is more whimsical than the one I used as a child, in Lutz, Fla., but it's similar in its modernist blockiness.

When I lived in Sarasota, Fla., in the 1990s, I heard a lot about the Sarasota School of Architecture, a group of modernist architects who created beautiful, spare buildings uniquely suited to Florida's then un-air-conditioned climate. Those buildings, by famous architects like Paul Rudolph, have lately been coming down at a disappointing rate.

On Friday, I sent my brother an article about a Sarasota School building facing possible demolition. A city planner, he wrote a piece on his own blog that lays out the reasons why tearing these structures down is a travesty. If you're at all interested in preservation, take a look at what he's written.
Posted by Steve Reed at 11:00 AM