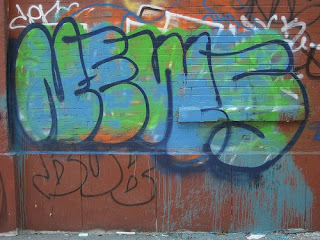 So here's the back story on yesterday's poem, for those of you who asked: I wrote it about my high school girlfriend. (Curve ball there, eh?) We remained friends after I came out and we took a trip to Key West with another friend, which inspired the setting -- but at the same time, our relationship was changing and we were headed in very different directions. She's now married with two kids in Florida, and I still get in touch with her once or twice a year. This is actually one of the few poems I ever had published, in a small literary magazine called Tin Wreath.

I watched another Andy Warhol movie last night -- "Heat," with Joe Dallesandro and Sylvia Miles. I'm sure these movies must have inspired John Waters. They make me want to bathe.

I've started painting my apartment. What an ordeal! I hope to finish it up by the end of tomorrow, but there are no guarantees.