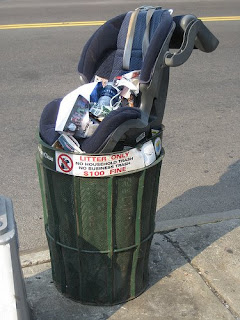 1. A tree lying at the curb on E. 29th Street, felled and dismembered by a sidewalk project, its leaves perky, green, unaware.

2. A slim college-age guy in tight black jeans, standing in front of Muji on W. 40th Street, doing a crossword puzzle, cigarette idle between his fingers.

3. A twentyish woman, busty and tanned in a tight low-cut plaid dress, crossing E. 17th Street with an overweight, fiftyish man, and both climbing into a shiny black Lexus.

4. An older man with white hair in a blue seersucker suit, looking like a summery character from F. Scott Fitzgerald, on the subway platform at Union Square.

5. A teen-aged boy on the 4 train, wearing a t-shirt that says “Thank God for beer, women and football,” with an older woman who can only be his mother.

6. A teen-aged boy on Park Avenue, pulling down the waistband of his saggy jeans and boxers to show a teen-aged girl his tattoo, an illegible word over his pelvic bone. “That must have hurt,” the girl says.