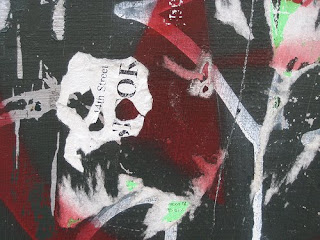 Last night I went to see “Hair” in Central Park. What an awesome show! I’ve been a big fan of the music for years, but I knew it solely through Milos Foreman’s 1979 movie version, having never seen the stage show. I never understood why people didn’t like the movie better.

But now I do. The stage production is an entirely different show! The movie adds layers and layers of plot that don’t exist on stage, and it switched around the songs, giving well-known numbers to different characters and taking them out of context. And it altered the ending significantly.

So, anyway, last night’s show was great. During the number “Hair,” the cast streamed into the audience and one dancer bent over my seat to let her hair cascade onto my head -- which is so obviously and completely bald. Funny! (Believe me, I was aware of the superficial irony of my enthusiastic presence at this show.)

Another cast member gave me a flower, which I wore behind my ear. And at the end, a good portion of us in the audience got up on the stage and danced to “Let the Sun Shine In” and “Hair.” Very fun.

But also very touching -- because during the production you can’t help but reflect on the fact that we’ve learned so little over the decades since the 1960s. Here we are again, basically in the same position. As Oskar Eustis, the Public Theater’s artistic director, wrote in the program:

“There’s a tragic sensibility at the root of ‘HAIR,’ a deep awareness of the gap between our vision and our achievement, that makes this piece as relevant today as it was 40 years ago. Trapped once again in a war that we were tricked into by politicians, a war the nation has totally lost faith in, with no clear exit strategy and ineffectual resistance, HAIR resonates in 2008 more than we might wish.”