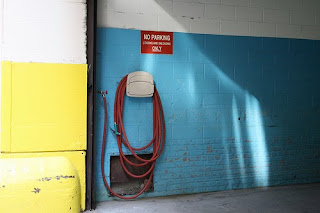 When I woke this morning, I realized almost immediately that I had been dreaming. I tried to clutch the dream, remember it, but its misty retreat left me with nothing.

I was reminded of an article I read in The New Yorker yesterday about dreams, and specifically nightmares. (I never have nightmares -- at least, not that I remember -- and I never feel fearful or anxious when I awaken.)

This article, unfortunately not available online, contained a few interesting factoids. One is that women remember their dreams more easily than men. This may explain why my female friends can often describe dreams in great detail while I can’t remember whether I dreamed at all.

(When I was in the Peace Corps, my roommate Juliet would awaken every morning and offer up a step-by-step recitation of her dreams. It blew my mind that she could remember them so well. Every plot twist, dialogue, scenes stretching back what seemed like hours -- you name it. I always suspected her of making it all up.)

The other, and more interesting, factoid is that dreams seem to be changing. When Sigmund Freud recorded dreams at the turn of the century, they were long narratives, at least according to his notes. Many took pages and pages to record properly.

Now, researchers have found that dreams tend to be shorter and jumpier. If in the old days they were full-length feature films, today they’re YouTube clips. The article quotes British psychoanalyst Susan Budd: “Modern patients don’t often produce the kinds of dreams that Freud had. Modern dreams mostly seem to be shorter and more fragmentary, and this is because the dream is undoubtedly a cultural as well as a neurobiological product.”

We often talk about the ADD-inducing effects of our culture, from the Internet to our crazy workaholic tendencies, but I never thought about their effects on our dreams. It’s fascinating, and a bit alarming, to think our minds have been rewired to produce short-form nocturnal dramas.

My dreams, on the rare occasions when I do remember them, seem more long-form. One scene will pass into another, but there’s usually some kind of transition -- seldom just a jump or abrupt change. I don’t think I’m immune to our cultural slide toward ADD, but maybe I’m less affected, since I don’t watch much television and I tend to read a lot.

Anyway, it was a fascinating article!