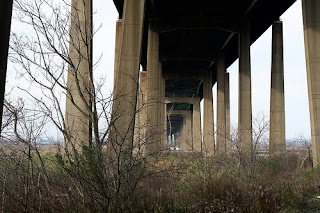 I had a busy weekend. I was out all day photographing street art on Friday (I didn't even bother to go to work) and on Saturday morning I had a real urban adventure.

For months on my way to and from Dave's, I'd seen interesting graffiti from the train as it passed through Secaucus, N.J. On Saturday I decided to find this graffiti, which is painted on the concrete support pillars for a huge overpass of the New Jersey Turnpike. 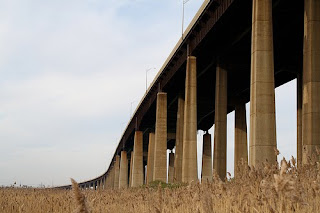 I took the train out to Secaucus and began walking. I'll spare you all the details except to say it took a good 45 minutes of trial and error before I finally found myself beneath the Turnpike, which towered over my head. The ground beneath it is marshy and full of tufted brown grasses taller than I am.

Walking around down there was a bit treacherous -- more than once I took a step onto what looked like solid ground, only to be up to my ankles in mud. (And this being an industrial area of New Jersey, God only knows what's in all that mud.) 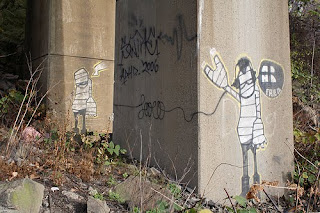 I did eventually make my way over to the graffiti, though, and it was terrific. A street artist named Faro painted several of his trademark mummies on the concrete pillars, including these two. 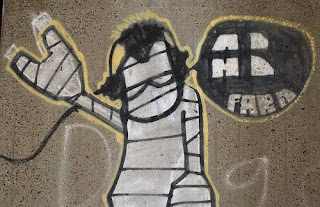 This guy seems to be saying "Rock on!"

Getting back to the train was much easier because I knew which route to take. All my photos will be up on Flickr in about a week!
Posted by Steve Reed at 2:40 PM