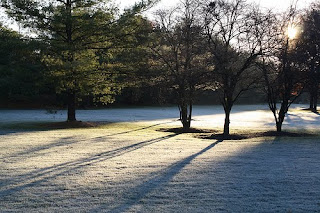 I participated in an American fall ritual on Friday night -- a high school football game. I wanted to see Dave's band in action, so I zipped out to New Jersey on the train, caught a cab to the school, got a couple of cheese pizza slices at the concession stand and settled into a spot on the aluminum bleachers overlooking the field. The night was chilly, and in fact grew steadily colder. I was wearing a shirt, sweater and jacket and a stocking cap -- and pants of course -- but pretty soon I was chilled to the bone. I thought, I'm going to be like William Henry Harrison. I'll be dead by Monday.

I joined the game in the middle of the first quarter. The referees kept stopping the clock during the second quarter, which was making me crazy because I was so uncomfortable, but finally we got to the half-time action. The band did a good job with field movements, though as I told Dave, I couldn't hear them very well. I don't think they're loud enough.

I didn't stick around for the rest of the game. Instead, I came back to Dave's and got warm. I have never been so happy to come inside. 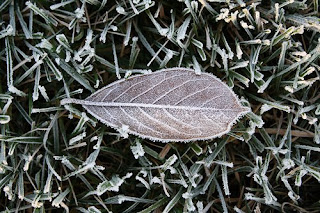 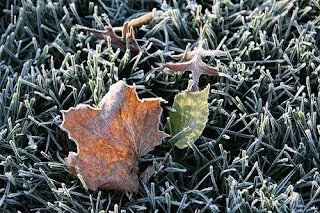 The next morning, when I took the dogs out for their walk, the field next door was covered with frost. Surprisingly the dogs didn't seem to mind it, though I'm sure it must have numbed their little footpads.
Posted by Steve Reed at 12:23 PM