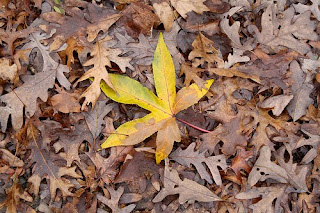 Dave and I took the dogs for a walk in the woods on Sunday. These particular woods are part of East Brunswick’s open space preservation program, and they’re a hop and skip away from Dave’s apartment. I found them by accident the week before and thought they’d be great for walking Ernie and Ruby, because they’re much closer than driving over to Cheesequake. But his dogs aren’t exactly athletic, living inside as they do, and we nearly wore them out on this excursion! Poor Ernie came back and slept all day. I was worried about him!

So the jury is still out on whether these woods are good dog-walking territory, or whether they’re just too far away. 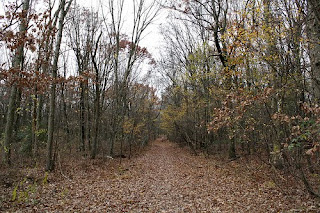 In any case, they’ll be good walking territory for me. I enjoyed the woodsy smells and the very last of the colored leaves, the shelves of fungus growing on the trees and the odd bulbous insect nests we found on some twigs. It’s great to have nature nearby.
Posted by Steve Reed at 11:11 AM