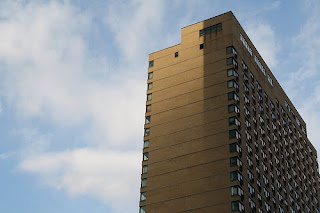 People sometimes talk of experiencing a “swirl of emotions,” and though I’ve long known cerebrally what that meant, I don’t think I’ve known emotionally until now. I really do feel like I’m swirling! One moment I’m anxious, another I’m sad, another I’m perversely happy and excited, and then I’m anxious again. Around and around!

Part of me relishes the opportunity to take some time off and pursue my own interests over the next few months. Obviously I’ll be looking for a job, so my time won’t entirely be my own, but I ought to have the opportunity to get out and do more photography on nice days, for example. I’ll be able to read and write more. My career path is wide open. Sounds pretty nice, actually!

Also, I’m intrigued by the opportunity to throw off some of the burdens of journalism. Maybe now I can be more outwardly politically vocal, for example, with less need to maintain an unbiased veneer. Once again, I’ll be job hunting, so I won’t go crazy -- but the possibility is appealing.

I mentioned my layoff explicitly on Facebook yesterday, with the rationale that it’s better for my 400 friends and contacts to know so they’ll think of me if an opening arises. And I’ve told most of my coworkers. My Zen teacher said I have “a new life,” and added, “the important thing is to keep practicing, and being open to what arises.”