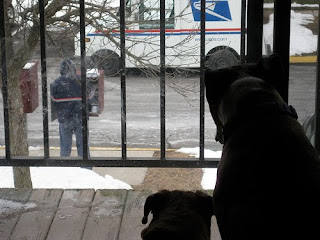 When the mailman arrived yesterday, Ernie and Ruby ran to the window -- as they always do -- and began growling. It's so funny how dogs react to mailmen. Ernie and Ruby usually don't growl at anyone else walking around below our windows. What's the deal?

My friends John and Sue have a dog, Fitzie, who goes ballistic when the mailman comes to the door. They have a mail slot, and theorize that Fitzie hates him because he touches the house. Sue says Fitzie can hear the mail truck in the street, distinguish it from other cars and get growling early.

Dave says Ernie, particularly, always reacted badly to the mailman. When he lived in Michigan and the mailman came to the door -- once again, he had a mail slot -- Ernie pitched a fit. He'd barrel through screen doors to attack.

Our mailman doesn't even touch the house. But maybe Ernie remembers the truck, or the uniform -- because he still hates the mailman.
Posted by Steve Reed at 11:35 AM

I think it's just their attempt to remind us they could be watch dogs. In our case Jake can't even see the mailman or the UPS guy or anyone else who comes to our front door, but you would think he was a trained attack dog when they come. I'm sure they are glad there is a solid door between them and the ferocious dog, who would actually let them pet him if they ever met up.

The guy comes around suspiciously often, loiters near their house,, riffles through paper stuff, touches your mailbox--well of course they have every right to be concerned. Maybe you shouldn't let them watch too many spy movies.

Our mailbox is on the corner, so the dosgs don't bark at the mail guy. They make it up by barking randomly.

When my mailman comes, by basenji Bow comes and sits on my lap, looking up at me for protection.

My cats growl at the door when they hear the truck, then the boxes being opened...I've never seen felines do that before...