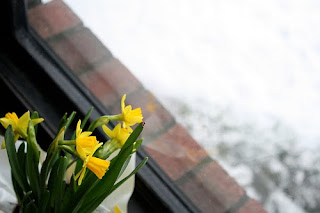 Just as I was waxing poetic (or not so poetic) about the arrival of spring-like weather, we're getting slammed by another winter storm. This one is supposed to sit on top of us into tomorrow, dumping up to 16 inches of snow on parts of central New Jersey. It's been dubbed a "snowicane."

It's snowing outside as I type, but so far it's more like slush on the ground -- a big winter Slurpee. I was enjoying the melting snow, and I'm sorry to see the struggling grass covered up again. I'm going to get to the gym this morning so I can go running, thereby forestalling cabin fever over the next few days.

Dave is only working a half-day today, and we bought stuff to make chicken chili tonight. That should last us through tomorrow, when presumably we should be able to go shopping again. I don't think we'll have to follow in the footsteps of the Donner Party, despite the apocalyptic nature of storm coverage on the news. (Watch out, Ernie and Ruby!)

Though my cocktail of choice will always be a gin and tonic, I've been experimenting with mojitos lately. Dave had about a third of a jug of clear Bacardi rum kicking around, and part of my tendency toward neatness is to figure out ways to use things up. So I found some bottles of mojito mix at the liquor store for 99 cents apiece. I will never be a big fan of rum, but they're not bad drinks. Maybe I'll pour some of those this evening as we cook and watch the snow! I'll pretend I'm in the Caribbean!

(Photo: Some daffodils we bought at Shop-Rite, blooming on our windowsill.)
Posted by Steve Reed at 1:01 PM