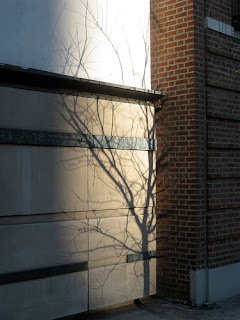 Well, here we are in the middle of a legendary snowfall, though from the looks of things it won't be as bad in New Jersey as it is to the south of us. The plows and snowblowers are out already -- I hear them grinding away in the pre-dawn darkness. I've seen this storm variously referred to as "Snowmageddon," "Snowcalypse" and "Snowpocalypse." Take your pick!

Dave and I went to the store yesterday and stocked up on groceries, like every other living soul within a ten-mile radius. We had to park the car in Newark, practically. But we did manage to buy all that we needed, so we have a cozy weekend of cooking and movie-watching planned. (On the movie agenda: "Ordinary People," "Opening Night" (with John Cassavetes and Gena Rowlands), and "The Shining.")

We're going to make something known as a Danish Coffee Ring, from a recipe I cut out of Southern Living magazine way back in 1980 or so. I made it then, loved it, made it one more time, and haven't made it since. It will be fun to see if it's as good as I remember.

I am normally not good at sitting around the house for long periods of time. I get cabin fever. So we'll see how I fare! Right now, the prospect of digging out the car isn't very appealing despite its novelty.

(Now there's a huge backhoe in the parking lot with spotlights and a plow attached to the front. Kind of seems like an overreaction, but whatever.)