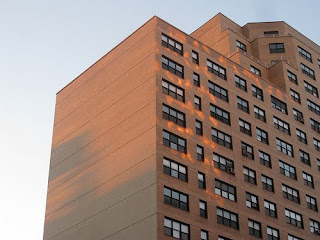 When I lost my job in November, I thought, "Well, this isn't so bad. Now I'll have lots of time to think!" I imagined myself writing creatively, doing photography, and maybe coming up with a second career.

But without the stimulation of a daily job, I've found it difficult to create anything. Being unemployed is hard. My days are big, empty stretches of time, particularly here in the suburbs, and I've even had trouble coming up with enough interesting content for my blog. (Interesting being a relative term -- ha!)

It's almost like my brain just isn't getting enough exercise. I'm reading books, keeping up with the news, watching movies, cooking, cleaning -- but that's nothing like being faced with the daily social interaction and demands of the workplace.

It's particularly tough now that we're essentially snowed in. We could get into the city, with some effort and expense -- but doing anything outdoors here in Central New Jersey just isn't very appealing, if it's even possible. On Thursday we tried to come up with something to do locally and aside from going to the mall, there just wasn't much. (We even considered going bowling. Lord!)

I enjoyed my first few months off from work. But my mom told me at the time that I'd soon start going crazy, and I can see what she means. It's not craziness I'm feeling, though, so much as shallowness, flabbiness.

I have learned some things. First, I am not a fiction writer. I've explored creative writing and several people urged me to come up with a novel. But I just don't have a novel in me. Having the technical skills to put words on a page is only a tiny step toward creative writing, and I unfortunately lack the drive, the ideas and the behavioral understanding to produce truthful fiction.

Second, I'm not an entrepreneur. (I guess I knew that already.) I half-heartedly toyed with the idea of being a professional organizer, if not for a living then to make some extra money. I never considered it a serious career prospect -- more like a way to kill time -- but I see now that it would never really keep me occupied. Organizing my own house, and enjoying it, is a far cry from organizing for others.

I've backed off the idea of selling my apartment, particularly now that I've had a job interview in the city. I may need that apartment, especially if I find late night or early morning work in Manhattan. I'm going to just sit on it for the time being. I have plenty of money to maintain it for now.

And fortunately, the news organization that interviewed me for a job a week ago is having me back on Monday for a second interview. Maybe my jobless, aimless winter is finally coming to an end. Keep those fingers crossed, blogland!