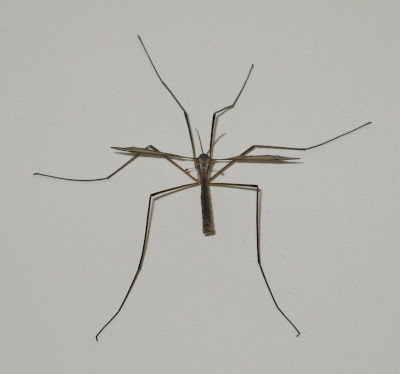 One of the things that Dave and I have found interesting about England is the marked absence of insects. At least during the two months that we've been here -- in summer, a time when you'd think bugs would be at their worst -- we've seen very few. A couple of houseflies here and there, some bees on our lavender, and no crawling critters at all.

(Not that this is a bad thing.)

Windows in London don't even have screens, which shows just how insignificant insects are. Coming from Florida, where screens are mandatory and the air is always chock-full of flying things, and New York and New Jersey, where roaches, mosquitoes and gnats are commonplace, I find it a peculiar relief to live without window screens.

In the last several days, though, we have seen a few of these guys (above). They're spidery-legged flying insects an inch or two long. They look like really huge mosquitoes, and after doing some internet research I've learned they're called craneflies. They don't bite, and they're hardly exclusive to England -- they're common all over the world, and in fact I'm sure I've seen similar species in Florida.

If you look closely just beneath its wings, you can see two small rudders. These are called halteres and they help orient the insect during flight. Pretty cool, huh? Evolution is amazing.

Despite the halteres, though, craneflies fly in a sort of wobbly way, and they're very easy to catch. So last night, after taking this picture, I caught this guy and a companion and put them outside. Dave laughed at me and kept yelling "Kill them!" But that seemed like a rather extreme thing to do to a bug that doesn't even bite.

I later read that putting him outside -- he's almost certainly a male, based on the shape of his abdomen -- won't extend his life by much. By the time craneflies reach adulthood, they only live long enough to mate and die. He's pretty much at the end of his life span, but maybe I gave him a few more amorous opportunities.
Posted by Steve Reed at 9:20 AM