'Exit Through the Gift Shop' 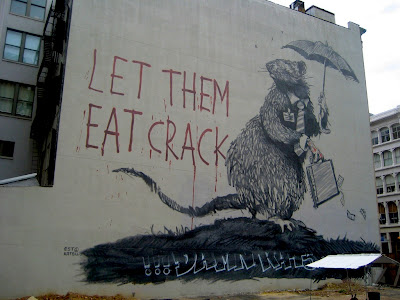 I finally, finally, finally had an opportunity to watch Banksy's film "Exit Through the Gift Shop" last night. It was ultimately far more interesting and critical of the world of street art, and art in general, than I expected.

I thought the film would be a documentary about Banksy. Instead it's a documentary about the entire street art movement, and ultimately an "artist" who goes by the name of MBW, or Mister Brainwash. MBW is the camera-happy cousin of another street artist, Space Invader, and through that connection he began meeting many artists and filming them at work. He met some of the most well-known image-makers on the streets, such as Swoon and Shepard Fairey.

Challenged by Banksy to make his own art, MBW puts a few pieces on the street, and eventually goes all-out and mounts a huge show in Los Angeles which sells nearly a million dollars worth of art. In documenting the evolution of this show, though, the movie questions MBW's artistic chops and the phenomenon of street art as a whole. Is MBW really making art, or just churning out some vague approximation and selling it to gullible suckers? Is art merely a cool image, no matter how derivative? Does it have to be important, or is it enough to be rebellious or fun? Does it have to be made by the artist himself, or is it sufficient for an artist to provide direction -- as MBW does -- to a team of printmakers? 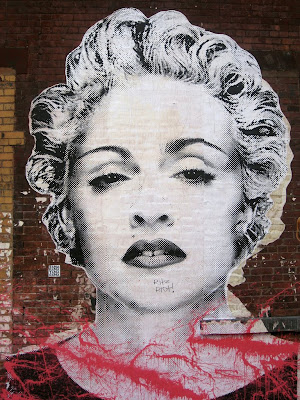 The movie made me ponder the line between graphic and fine, or meaningful, art. (Or, indeed, whether such a line really exists.) Take Andy Warhol. To me, Andy Warhol was a brilliant graphic artist, but his artwork doesn't reach a higher plane -- particularly now, viewed in retrospect. And despite my love of street art, I think many street artists are similarly talented at creating images, but not necessarily images that push the boundaries of expression and viewer experience.

I like graffiti and street art because it's democratic. It's there for everyone, and it's part of a sociological conversation that occurs on the streets for all to see. While some of the art enriches the artists indirectly, by raising their profile, I don't think many make a living at it. (Banksy, whose work does transcend graphic art, is an exception.)

MBW is a lesser Andy Warhol, and even derives much of his imagery from Warhol. The movie left me feeling a bit taken for having merely photographed his work. But on the other hand, it's on the street, it's part of the dialogue, so why not?