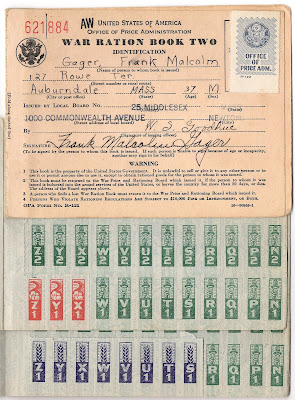 While going through some old paperwork, I came across the World War II ration books belonging to my grandparents, mother and uncle. This is my grandfather's book. It includes some unused stamps for items including bread and produce.

This really shows how the war affected everyone and their consumption of even the most basic goods. It's hard to imagine being rationed bread or potatoes.

I posted this on Facebook and I think some of my friends thought I was trying to make a political point, or contrast between then and now. Honestly, I just thought it was interesting from a historical perspective. I guess it does show how everyone was united in the war effort back then, unlike our subsequent wars, which have been more divisive and less clearly defined. But agriculture and manufacturing are so different now -- I'm not sure you could make a meaningful comparison with what was going on in the 1940s.
Posted by Steve Reed at 9:56 AM