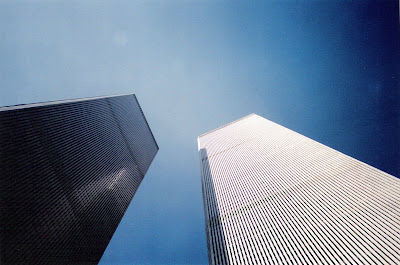 I've already written about my experience of 9/11 on this blog -- but I haven't gone back even further, to a visit I made to the World Trade Center in 1997.

There's not much to the story. At the time, I was living in Florida, and visiting New York with a friend. We went to the WTC and took photos on the plaza, looking up at the twin monoliths and Fritz Koenig's sculpture "The Sphere" in the center of the plaza's fountain. 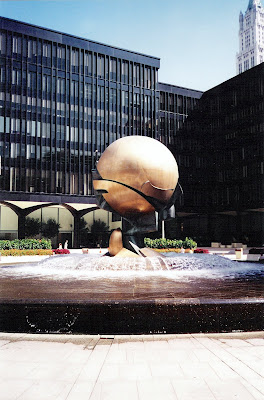 A lot of people griped about the World Trade Center's architecture when the buildings were first erected -- that they were too big and too boxy. The most elegant element of their design, I think, was the way they were offset against each other on that open plaza -- not parallel or at a right angle, but just slightly askew. I also liked the arches formed by the building's converging lines on the lower floors.

We went into the lobby so we could go up to the viewing deck on the top of the building, but the line was really long. So we decided to skip it. Even after I moved to New York in 2000 I never went up in the World Trade Center, and after 9/11 I regretted not visiting it more thoroughly.

We did go to the underground shopping mall beneath the WTC. In fact, the only pertinent comment in my journal about that trip is: "We didn't go into the Trade Center, but we did stop at Structure, where I got a great shirt!" 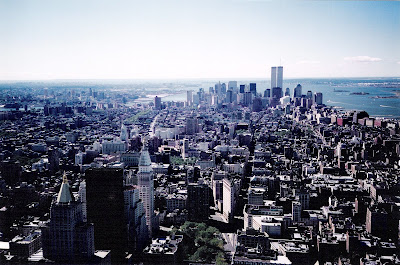 My friend and I did go up in the Empire State Building, though, and I shot this photo of lower Manhattan from that vantage point. Manhattan never looked right to me after 9/11. The twin towers, as monolithic and boxy as they were, helped balance the skyline -- as if you could put the whole city on a teeter-totter with its fulcrum in Chelsea, and it would stay level. Now Midtown looks overly heavy.

On Labor Day weekend 2001, I walked beneath the World Trade Center with my stepmother and her mother, both visiting. We didn't go up in the building then, either, and certainly could never have imagined what would happen just a week later.
Posted by Steve Reed at 7:08 AM