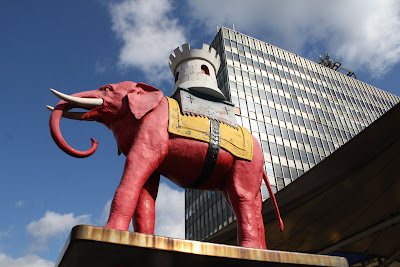 To continue our recent zoological theme -- we've had posts about goats, cats and fish -- let's move on to elephants.

The end of the Bakerloo Line, one of the tube lines in London, is a stop called Elephant & Castle. When I visited London as a tourist I used to stay at a hotel near a Bakerloo stop, so I often rode that train and heard Elephant & Castle announced as its ultimate destination. It became a sort of mythical place in my mind. What does it look like? Are there elephants? Are there castles?

Yesterday I decided to solve the mystery. So I rode the Bakerloo line to its southern terminus, and was surprised to find there are, in fact, a few elephants hanging around.

The tube stop is near a downtrodden mall called the Elephant & Castle Shopping Centre -- that's its sign up above. There's also a large new building nearby called Strata, topped by three wind turbines and justifiably nicknamed The Electric Razor. The development company leasing out this building uses an elephant as its insignia: 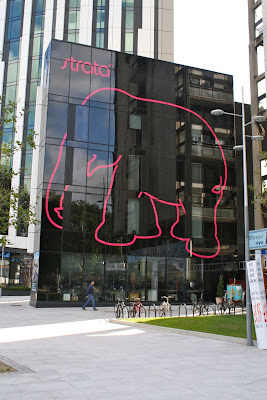 And then there are the arches over the tube entrances -- which here say "subway," a word I rarely see in London: 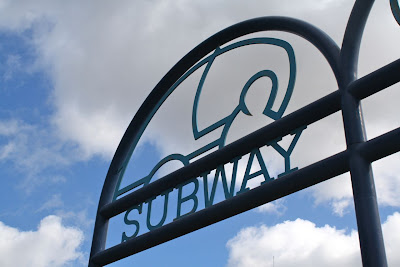 The Wikipedia entry about Elephant & Castle includes some theories about the source of the name, which apparently dates to the 1700s. The area was a trade center for knife-making, and the knife-makers, or cutlers, used an image of an elephant and castle because elephant ivory was used for handles. The castle might actually be a howdah, a carriage mounted on the back of elephants in India.

There's also a suggestion the phrase is a corruption of "La Infanta de Castilla," which could refer to any of several Spanish princesses connected to English royalty. If true, I'm sure they wouldn't appreciate that over time they've gone from being infantas to elephants. 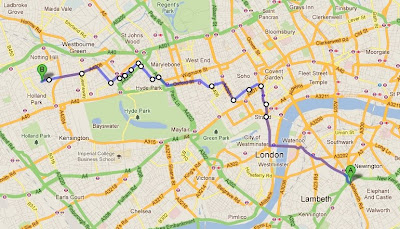 After checking out the scene, I decided to walk toward home. I wound up walking all six miles back to Notting Hill (map above), running a few errands along the way. It was beautiful weather and I had a great day!
Posted by Steve Reed at 8:08 AM