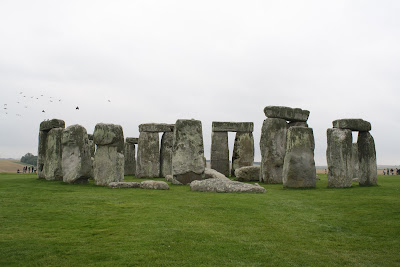 When I was a junior in high school, I did a report about Stonehenge that ignited a fierce desire to visit the prehistoric monument. It seemed so lonely and mysterious, standing out on the chilly, windswept Salisbury Plain, its purpose and creators unknown. I love remote places, and at the time -- fueled by '70s cultural fare like "Chariots of the Gods" -- I was fascinated by ruins of unknown origin.

My teacher -- the same teacher whose books I cooked -- gave me an A on the paper, and wrote, "I hope you get to see it one day. It is a spectacular site."

So when Dave and I happened to watch a National Geographic Channel show about Stonehenge last weekend, I thought, "There's no time like the present!" The next day, I booked us on a bus to Stonehenge.

This morning, Dave and I made our way to Victoria Coach Station, as the bus terminal is charmingly known, and set out for Stonehenge. The fact that I still have that high school report shows how much of a dork I am, and I brought it with me. A photograph of me at Stonehenge holding that report, written when I'd never left the Eastern Seaboard of the United States and the rest of the world existed only in my imagination, seemed like a terrific symbol of how far I've come and how much I've been privileged to do in my life. 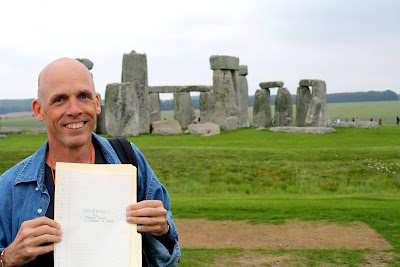 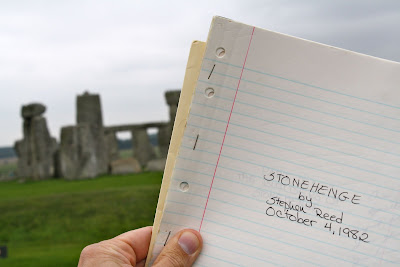 Our bus trip wasn't ideal. We booked with a local tour company which, unfortunately, failed to keep the bus toilet very clean, giving the entire vehicle a malodorous air. (I called it the "Piss Bus.") Our driver was also ordered to make a side trip to Windsor Castle on the way home in order to pick up some mysterious bald guy -- those bald guys are so much trouble -- and that added an hour to the trip.

The monument itself was spectacular, though smaller than I thought it would be. All the accounts of Stonehenge emphasize the immense size of the rocks -- and they ARE immense, by any standard -- but when you keep hearing about their immensity and then finally see them, you can't help but think, "Oh, they're a bit smaller than I expected."

My favorite part of the visit was hearing that scientists have found more than 90 species of lichens growing on the rocks. They're easily visible from the path that circles the monument, along with the flocks of starlings that cluster atop the stones. Stonehenge is its own ecosystem. 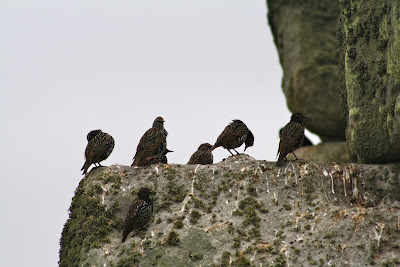 English Heritage, which owns the monument and the surrounding land, has done an admirable job of preserving its isolated feel. Visitors are kept well back on the path, and any photo seems to show Stonehenge standing by itself, an abandoned, timeless ruin.

Dr. Samuel Johnson once said of similar structures: "To go and see one druidical temple is only to see that it is nothing, for there is neither art nor power in it; and seeing one is quite enough." I disagreed with him in my high school report, and I disagree with him still. Stonehenge was well worth the trip.
Posted by Steve Reed at 5:11 PM