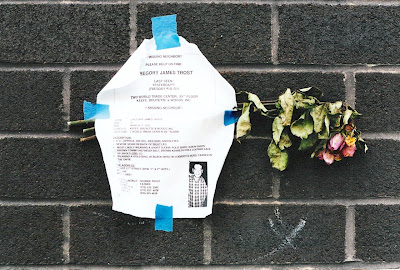 Almost immediately after Sept. 11, 2001, this flier appeared on walls in my neighborhood on Manhattan's Upper East Side. While lower Manhattan was virtually wallpapered with fliers of the missing after that horrible day, very few people bothered to post fliers uptown. So this one stood out, especially with its headline, "Missing neighbor."

I didn't know Gregory James Trost, who was 26 when he died. As far as I know I never saw him on the sidewalk or in the grocery store. But the flier brought home the seemingly obvious fact that people who lived next door to me, or down the street, or who went to my dry cleaner or gym, were among the dead of 9/11. My neighbors.

Trost worked as an analyst at Keefe, Bruyette and Woods, an investment firm on the 89th floor of the South Tower -- just above the floors hit by United Airlines flight 175.

He became a sort of totem for me, a way to mourn, to have a connection. Having read so many peculiarly intimate details of his life on the poster -- his size 11 shoes, his scarred leg, his black onyx ring -- I even felt like he'd become something of an acquaintance. I was 34 when 9/11 occurred, and it seemed incredible that someone eight years younger than me could have died.

The New York Times wrote brief profiles of each 9/11 victim and ran them during the following year. Trost's profile called him a "human jukebox" who knew the words to a wide range of songs and performed silly dances at parties.

"He had a sense of humor that set the gauge for everyone else," Jeanne Trost, his younger sister, told the paper. "What he found funny, it somehow always became funny."

I see now that Trost's family has organized a golf outing and reception to raise money for a scholarship in his name at the New York high school he attended. The web site for the event includes a profile of Trost here.

As for me, whenever I pass a 9/11 memorial, I'll continue to take a minute to find the name of Gregory James Trost, my forever-missing neighbor.
Posted by Steve Reed at 7:23 AM