Beans in a Jar 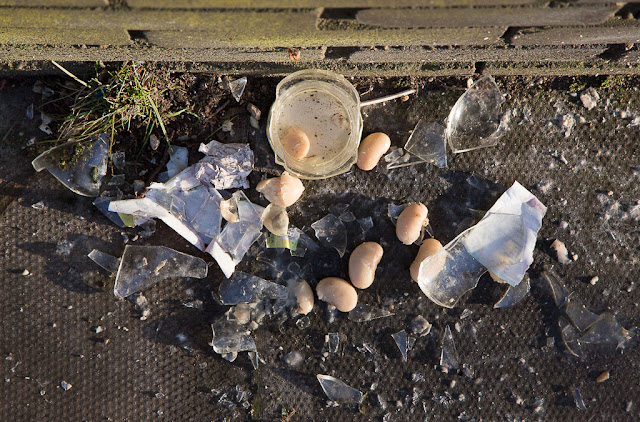 Here's a broken jar of beans I found on a recent walk to work. Why were there only about eight beans in the jar? Did it come from someone's grocery bag, lunchbox or trash? Very strange.

Speaking of beans in jars, some of you mentioned that you don't understand the American electoral system. Truth be told, most Americans don't understand it either. Caucusing is something that happens in only a few states, and Iowa's caucuses are "more important" because they happen first. But they're also notoriously unreliable as predictors of electoral success, so why everyone gets in such a tizzy about them I don't know.

As for delegates and the Electoral College and all that jazz, well, it's an arcane and probably outdated system. There have been talks of reform but they never go anywhere. And don't even get me on redistricting and the illusion of representative government, in a country where districts are wildly spidery and drawn to boost one or the other (usually the other) party's political advantage. 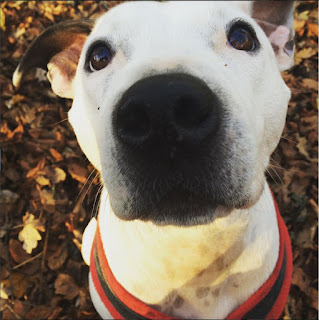 One of my commenters took Hillary to task yesterday for being more of the same -- essentially a money-grubbing politician beholden to big banks and big pharma. I get it, I do. But I don't think Bernie Sanders would be hugely different. Maybe I'm cynical, but this is the way the system works -- money talks, and not just during election cycles. Big banks and big pharma have the resources to pay for their lobbyists and protect their interests, and that would be true no matter who is in office. Regulating them isn't impossible -- in fact, it's necessary -- but it will always be a political dance.

The biggest problem I have with a Hillary candidacy is having to hear from her opponents about the Republican-manufactured scandal of Benghazi for months and months.

On a lighter note, here's a picture of Olga I stole from the Facebook page of our dog walker. I like to check every now and then to make sure she's appearing in the photos, just so I know she's being walked!

(She usually has a slightly mud-speckled undercarriage when we get home each evening, so I don't think there's any doubt about that.)
Posted by Steve Reed at 7:15 AM