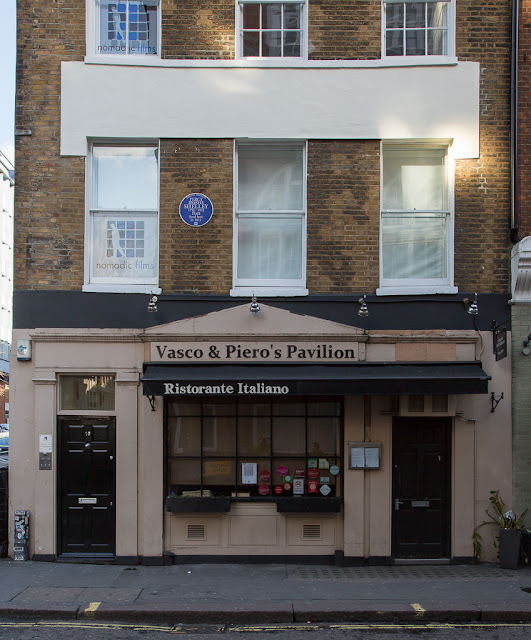 I passed this building on my walk through Soho on Saturday and noticed the blue plaque on the front. In London, blue plaques like these denote buildings of historic or cultural significance. In this case, the plaque says that poet Percy Bysshe Shelley lived here in 1811.

No doubt Vasco and Piero had not yet moved in -- although it looks like they've been there a while, so who knows?

It's kind of funny that the building gets a plaque because Shelley lived there for one year when he was 19. An urban bachelor pad, maybe, or since this was the year of his first marriage, perhaps a starter apartment for the young couple? The plaque doesn't say.

Let me just say: If I ever become famous -- which seems increasingly unlikely -- I'm not sure I want the equivalent of a blue plaque on my first apartment in Tampa, where the downstairs neighbor let her dog poop in her living room, the next-door neighbors fought loudly in Spanish and the guys across the courtyard lounged around in their underwear with the curtains open.

So what do we think about Iowa? My take is this: It doesn't matter much. Among the Republicans, neither Cruz nor Trump are electable in the long run, and my prediction is that history will relegate them to the ranks of Mike Huckabee and Rick Santorum, who also won Iowa in years past. Marco Rubio is the more serious threat to the Democrats, I suspect. And on the Democratic side, Bernie did well -- but as much as I like him, I don't think he's electable either.

This is just the first tally, and it's not representative of the big picture. I think people -- mostly the media -- get way too excited about it. I think ultimately we're going to wind up with Rubio vs. Hillary, and that will be an interesting battle.
Posted by Steve Reed at 7:14 AM