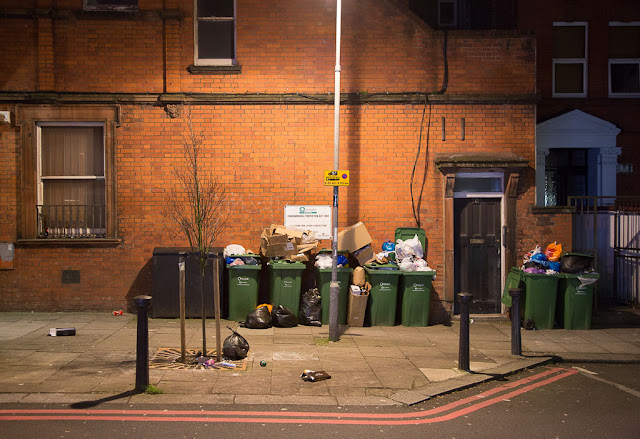 Once again, yesterday was super-busy. I guess this is going to be my Saturday pattern! I had French class in the morning -- in which we discussed a new pronoun, en, that I still don't fully understand -- and then a few hours at home before I went to meet my friend Sally on the South Bank of the Thames.

We had dinner at a blustery outdoor food court near the National Theatre, where I had veggie curry on naan bread, and then we drank some hot mulled wine. It wasn't cold out but it was spitting rain and very windy. We walked over to the river and nearly got blown down a couple of times.

We'd met to see a play, "Husbands and Sons," based on the novels and short stories of D. H. Lawrence. It was very good, with a terrific cast, but it left me thankful for modern marriage laws and divorce courts! (Not to mention labor laws, as it took place in a coal-mining town in the English midlands.) There were lots of domestic dramas and tangled emotions and the inevitable industrial accident.

We really are lucky to be living now, you know? It may not always seem like it, with ISIS and Donald Trump and enduring poverty and strife in many parts of the world -- but life is so much better now for so many people. It's hard to conceive of growing up in a coal-mining community (let's say) where virtually your only option is to go down the mine yourself. Most of us can make choices. I understand I'm speaking from a position of relative privilege -- choices may be limited if you're living in a poorer community with lackluster education, or in Somalia or Zimbabwe or Afghanistan -- but it's more true now than it ever has been before. Don't you think?

(Photo: Seen on a recent walk home from work along Finchley Road, North London.)
Posted by Steve Reed at 7:30 AM