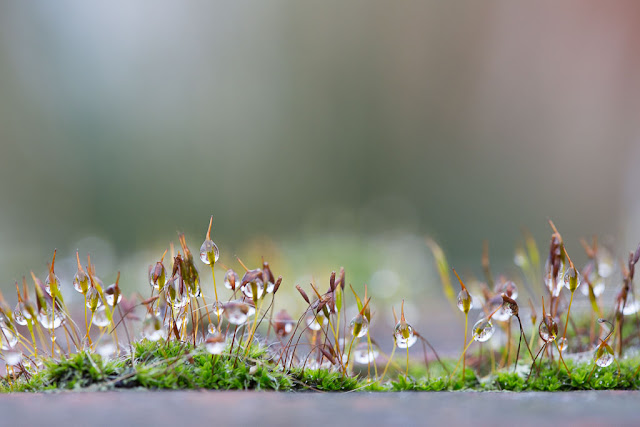 I was walking Olga yesterday morning when I noticed these little water droplets on some moss growing atop a brick wall near our house. Even though I was running late, with about a million things to do, I had to stop on my way to work and take pictures!

Back when I lived in New York, I occasionally browsed in a great shop in Soho called Moss. Maybe it's still there. They had shelves of overpriced but really interesting, artistic gadgets and tchotchkes. I don't think I ever bought anything there, though.

When it comes to moss, I prefer the real thing.

The first day back after a break is always a bit of a shocker. Lots of materials coming back to the library, a week's worth of magazines to be catalogued and racked, preparations beginning for the days and weeks ahead. I had a crazy, frustrating morning -- which isn't worth going into in detail -- but things evened out later in the day.

I mailed off my absentee ballot yesterday, so my vote for the presidential primary is in. Despite his win in South Carolina, I can't get too worried about Trump. I still don't think he can be a serious contender and I think he can be nothing but good news for the Democrats. I hope I'm right!
Posted by Steve Reed at 6:57 AM