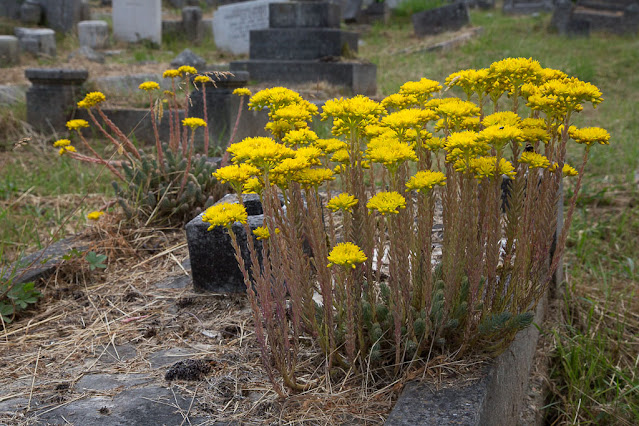 This is a type of sedum I found growing at the cemetery when Olga and I visited on Sunday. It's really beautiful at this time of year. We haven't had much luck growing sedum in our garden -- I think our soil is too heavy and clayey. I have to take a walk to enjoy it elsewhere!

I took no photos yesterday, which is pretty unheard of for me. I didn't even leave the house except to take out the trash. I've been completely focused on a non-fiction book I'm reading called "Hidden Valley Road," the engrossing story of a Colorado family's experience with mental illness. The parents had twelve children during the baby boom years after World War II, and of those, six had serious mental health issues, mainly schizophrenia. The book traces not only the family's experiences but also the medical profession's understanding and treatment of schizophrenia over the decades. I literally don't want to put this book down, it's so good. 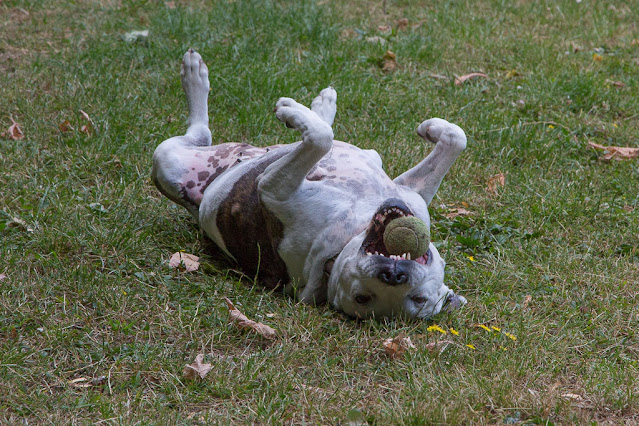 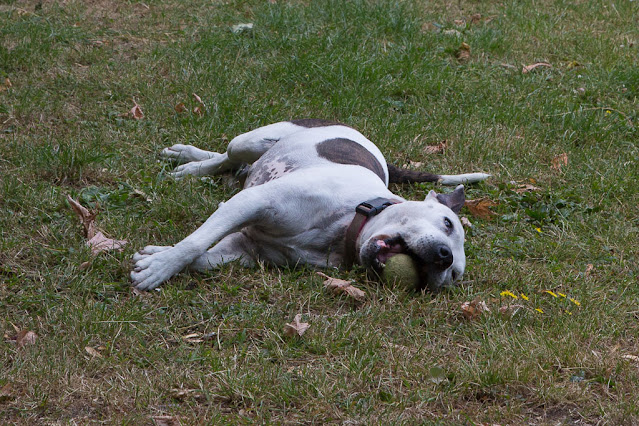 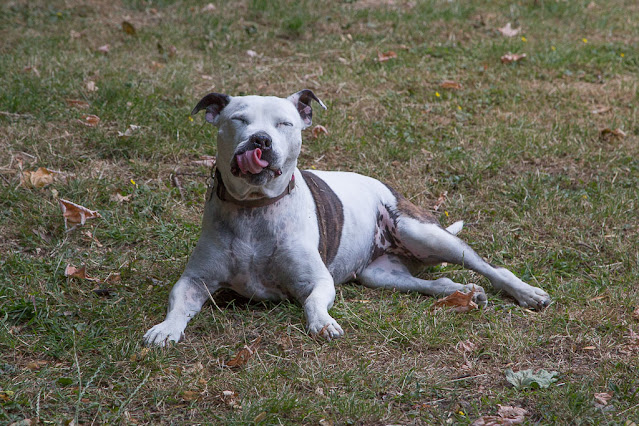 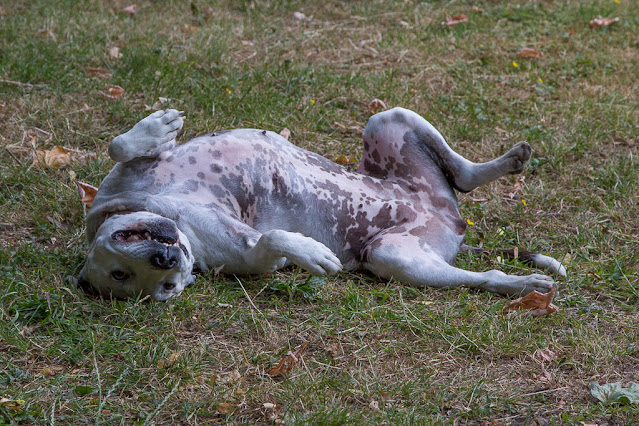 Which is why you're getting two-day-old pictures of Olga.

In the evenings, we've been watching "Web of Make Believe," a Netflix documentary that examines various Internet scams and conspiracies -- the ways fraudsters have been able to exploit the anonymity of the Web. We've enjoyed it a lot. We're also watching "Severance" on Apple TV and liking that.

Am I the only one, though, who is becoming fatigued with all these online subscription services for television? Amazon, Netflix, NOW, Apple TV, Disney -- how many subscriptions can we reasonably be expected to maintain? We haven't watched broadcast TV in months. In fact a few days ago I was training our passionflower vine along the wire leading to the satellite dish on the side of the house, and I told Dave, "Well, at least this dish is good for something."
Posted by Steve Reed at 7:59 AM

"Which is why you're getting two-day-old pictures of Olga." You say that like it's a bad thing; it is not :)

A book you can't put down is a wonderful thing, even on such a tragic topic.

The book sounds fascinating. I’ll add it to my list. I would love to roll around on the ground with Olga. And, no, you’re not the only one. I’m about to sign off a couple of the services we pay for monthly. We currently have 6. Ridiculous.

We don't do any streaming channels, it's just too much and who has the time.
Your nook sounds very interesting and depressing and sad. Thanks the goddess Olga's smiling face took me out of that!

I'll believe you about the book. While I am conditioned to murder mysteries, 'Hidden Valley Road' sounds uncheerful.

We pay $9 a month for Britbox. That is it. But I am tempted by the show on Disney about Fire Island. Maybe there is a free trial period and I could see it.

We have Netflix. Amazon Prime(which I am embarrassed to say I simply haven't bothered to figure out...

As Bruce Springsteen used to sing, "Fifty-Seven Channels And Nothing's On". Of course now it's five thousand seven hundred channels.
It's ridiculous.
It's good to take a day off now and then to relax.

We don't have any subscription services because all we watch is baseball and hockey. Mike used to do Netflix to feed his late night movie habit, but he got out of the mood.

I'd be happy to ditch cable but Marc has it on during the day. At night we watch streaming services that we piggyback on our kids' accounts. Or during the hot afternoons.

That sedum is pretty. The picture makes it look fairly big but it's not is it? Isn't sedum a low ground cover?

I still watch a lot of the old reruns on my cable TV. Sometimes I am tempted away by Netflix and Disney+ (which my son pays for) but I usually return to my old favorites. I am a big fan of a lot of the BBC shows that are shown on my local Public Television station.
The book sounds sad and I don't think I need more sad right now.

We haven't turned the TV on months either. We used to only watch PBS News Hour on it, and then we decided we hated watching the news, and that was that. We do have Netflix and can hardly find anything interesting there to watch.
Olga looks very happy.

You made me a happy camper with Olga's photo shoot!

It really is crazy to have all these subscriptions. I'd like to figure out how to get rid of my cable service and just use internet services. Just about the only thing I watch on the cable is the PBS Newshour. It's time to cut the cord...so to speak.

The photos of Olga are lovely.
That book sounds familiar, I think I'll get it out of the library. That poor family. That is a lot of pain and grief to deal with.

You know, I didn't think that I had any interest in the book you are reading but I looked it up anyways. I was very curious how a book on a topic like that could be so rivetting. It actually sounds awfully good. I watched an Oprah interview with the kids who did not have schizophrenia and found it actually very well done. It sounds like somehow the author managed to touch on the tragedy but set it within a larger framework of surviving, coping, coming out on the other side of very hard times. I'm going to get it from the libary.

the third photo- Olga eated da ball.
I have discontinued all subscriptions to everything except
the New Yorker online as well as in mail box...We get
amazon Prime and you tube , we do not need anything else at this point though during lock down I subscribed to all of it!

Just read about Chicago ... thank goodness for Olga!
We have no subscriptions but with all our favorite series on summer-break I'm tempted to try Netflix.

I don't have subscriptions to anything. I manage to find what I'm interested in in library apps or YouTube. I think I'm easily pleased.

You don't find many books that you can't put down.

I waste so much money on cable and have two "free" services (Netflix and Prime) that I get through my son-in-law. I would love Brit Box and Acorn but hate to spend MORE money and then series that I would want to watch would still be on a random service that I don't have. That book does sound fascinating albeit depressing.

Is it depressing?
I read the news, and we get Netscape.

Those photos of Olga are adorable. I could look at pictures of her every day. I don't have broadcast TV anymore. I limit my subscription services a bit. I would like to see some of the things on Apple, but I refuse to add it unless I take something else away.

Olga looks like she is having a wonderful time :)
The book sounds like a horror story. Twelve children! and six of them with schizophrenia :(

Jenny-O: I'm glad you think so! I'm sure some people are rolling their eyes. :)

Bob: I haven't found it depressing at all, actually. But yeah, Olga's goofy face always gives me a lift!

Andrew: I haven't heard about this Fire Island show! We have Disney at the moment, so I'll check it out.

Debby: We keep both of those as our basics, and then other streaming services only as needed.

Ms Moon: It IS ridiculous. While I'm happy not to have to watch advertisements, I hate having to pay. I guess that's the conundrum.

Bug: In the UK a lot of sports events are exclusively on pay channels like Sky. (Not that we watch them!)

Ellen: It was about six or even eight inches tall, I'd say? It was bigger than a lot of sedum I've seen.

Ellen D: I like the BBC shows too, which we get on the BBC iPlayer. Fortunately we don't have to pay for that. (Beyond our annual TV license fee, anyway.)

Robin: I prefer to read news as opposed to watch it. Television news just elevates my stress levels.

Sharon: We don't have any cable. We have Freeview, which is free television (and we never watch it), and then we have streaming via the services I mentioned. We pretty much only watch streaming.

Pixie: It IS a lot to deal with, but the book feels empowering, somehow. It conveys their determination to survive, care for each other (as much as each individual is capable) and be as independent as possible.

Debby: I'm glad you looked into it. I wish I'd described it better because I found it much like you describe. While harrowing I thought it was quite positive overall.

Linda Sue: I get the New Yorker and every year I go through a debate with myself about whether to keep it. It costs me $200 for an international subscription, which I think is insane. Why do they have to mail this paper THING across the ocean?

James and Brigitta: Yes, Olga is a good tonic for all the insanity in the world. I'd rather focus on her!

Boud: I think that's a great way to be! My problem is I read reviews of these hot new shows and then I want to see them.

Red: It's true. It's a rare book that's so compelling.

Margaret: I don't even know what Acorn is! That's exactly the conundrum -- you might subscribe to one or two, but then what you want to watch will be on a DIFFERENT one, and they all have different pricing plans and billing. At least with cable TV the bill is all in one place.

Mage: I didn't think so! I thought it was fascinating!

Janie: That's what I try to do every few months -- take a look at what we're getting and then drop the ones we don't need.

River: It's a horrific situation, no doubt. And some of the kids were worse affected than others. But the author does a great job depicting each of them as individuals and describing the ways they cope with their own illness or the illness of their siblings, and overall I think it's more empowering than depressing. The science is quite interesting.

I meant to cut my cable before I went north and now that I have to go back home to get my teeth put back together, I'll give it a try this week. I figured I can cut the cable, buy an antenna for locals and add two or three streaming services and still have a smaller bill. I'm leaning toward Hulu, Apple TV and Britbox or maybe Amazon. Either way, it will soon be farewell to the evil cable empire!