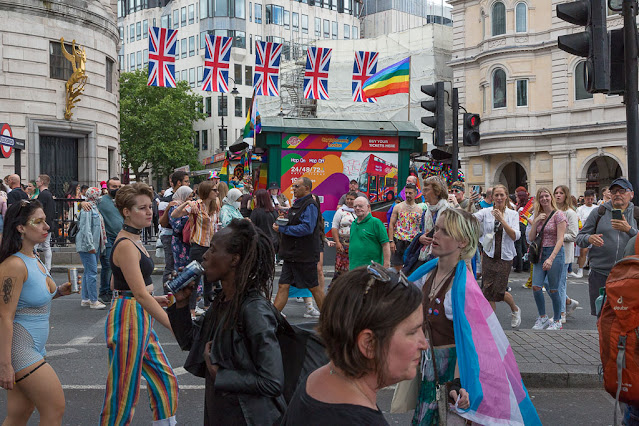 Yesterday was London's LGBTQIA+ Pride parade -- a big one, because it's the 50th anniversary of the first Pride march in 1972 and it's the first Pride event since the pandemic. Although I've gone to Pride pretty consistently over the years, first in New York and then here, I was on the fence about going yesterday. For one thing -- and it's a completely ridiculous reason -- I had a dentist's appointment right in the middle of the afternoon. Also, crowds!

But in the end the dentist didn't take long (no cavities!) so I decided to hop on the tube and go down to Westminster and see what's what. 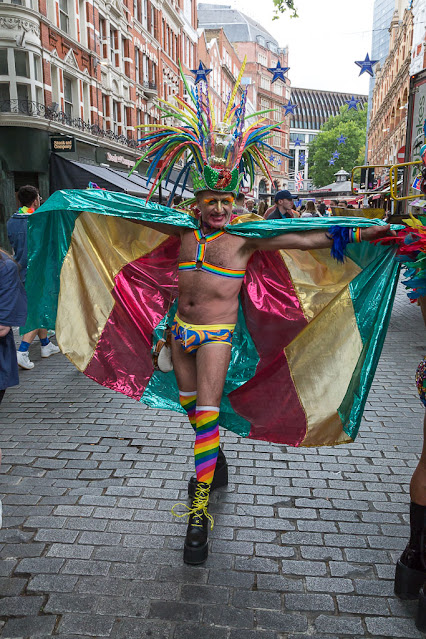 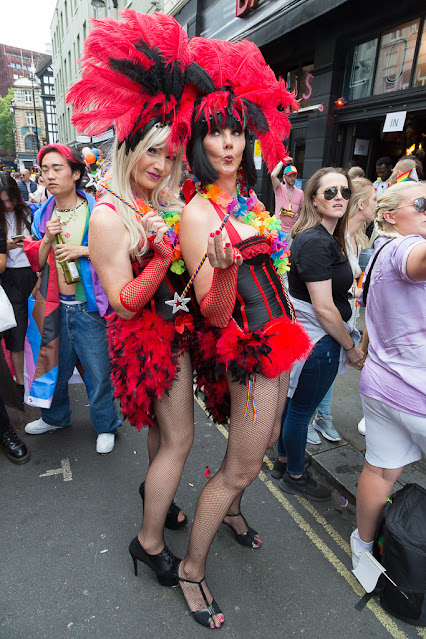 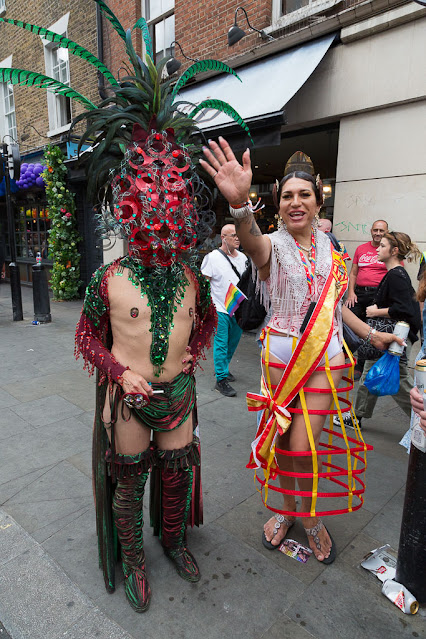 Of course there were the usual characters, all dressed up and dragged out for the day, many having disembarked from parade floats. 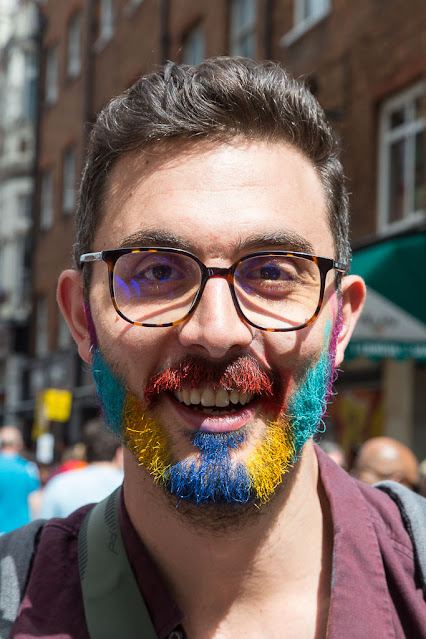 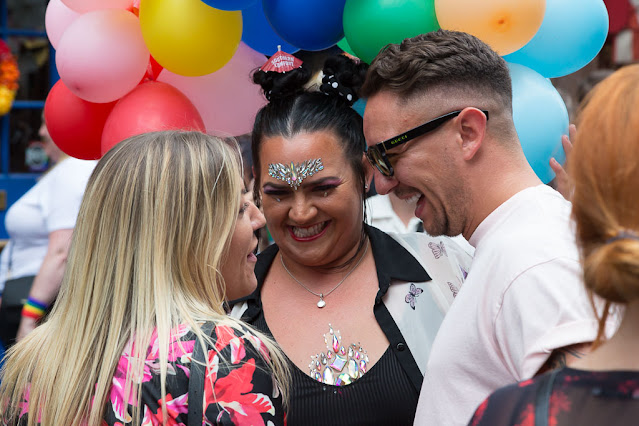 But there were lots of everyday people too, checking out the scene and celebrating the right for everyone to be who they are. 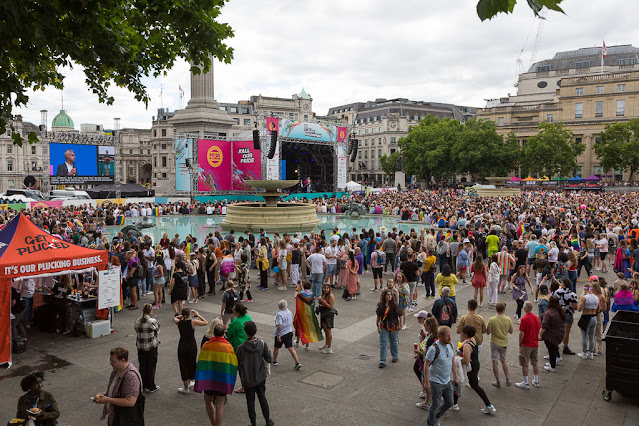 As usual, a celebration was held in Trafalgar Square during and after the march. Sadiq Khan, London's mayor, is up there on the stage and on the blue screen to the left. 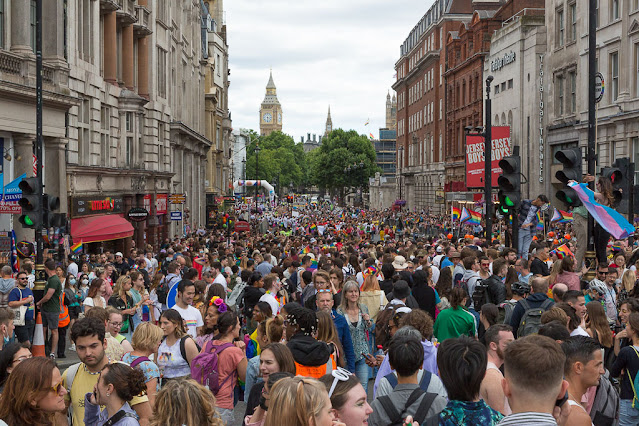 This was the scene looking down Whitehall toward the houses of Parliament. No wonder people were standing on lampposts! I caught a glimpse of the parade itself, but I mostly just wandered among all the people on the street. 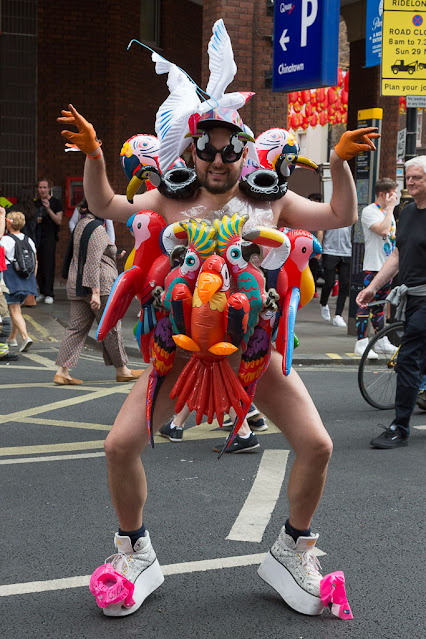 This guy had possibly the most creative costume I saw all day. It was composed entirely of inflatable birds. And I'm pretty sure that's all he was wearing.

A lot of people question why Pride parades always bring out such extreme costumes. It's even been argued that they detract from the message. But when you've been told all your life that what you are, and what you feel inside, is wrong, you want to push back hard against that shaming. I think that's why so many people put so much effort into being flamboyant. Plus, it's all a big show, and the gays love costumes! 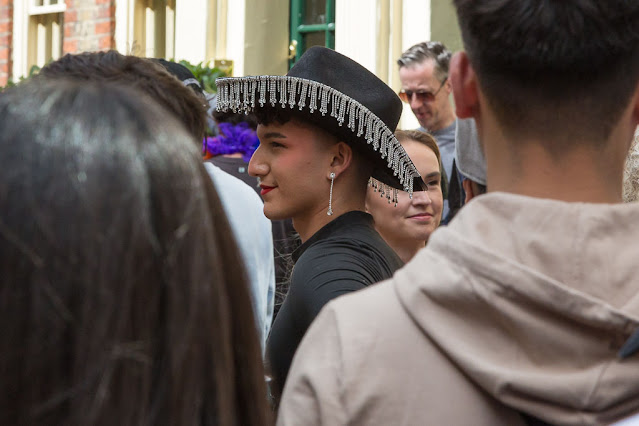 Ultimately, I'm so glad I went, even though I was only there for a little more than an hour. It was plenty of time to walk around, get lots of great photos and enjoy the positive energy. Happy Pride!
Posted by Steve Reed at 7:01 AM

I missed the Pride celebrations this year and don’t intend to miss them next year. So glad you got to experience a bit in London.

I understand marching for Pride and the colourful clothing and hair, but I simply don't see the need for the underwear outfits, the near nude bodies? What does that have to do with being proud?

So that is where the turaco went! See the tenth picture.

Happy Pride parade. It's a chance to be over the top!

I love the guy in the last photo.

A great party and that guy is right: Love Will Win.

This is the most positive thing I've seen in weeks. Thank you for going and for sharing. Such beautiful outrageousness! Let love rule! And give it a chance to win.

Love seeing these photos of the Pride Parade there. It looks like a beautiful joyous event. Yes!

You got some great photos. I love all the costumes especially the inflatable bird costume. That's a prize winner. I also like the rainbow beard. Very creative. The crowds are pretty impressive too.

What fun! Mardi Gras for the LGBTQIA+ crowd.

Fan-fucking- tastic!!! So glad you made it to the celebration, It is the best! Here, not so much, everyone is quaking in their platforms. Thank you for the amazing photos, LOVE!!!

What great photos of a marvellous event! Thanks for taking us there.

Two older men attempted to grab Pride flags and stuff from marchers, they looked a lot like the muppets, Statler and Waldorf, amazingly so. Anyway, the crowd formed a semi-circle around them and sang "I wanna dance with somebody" at them. It was amusing how frustrated they were about not being able to enforce their will upon the crowd. There was video on twitter.

Great photos Steve! Sure looked like a lot of fun. Love the guy with the "bird" costume.

It looks like an amazing parade; I love all the costumes. It's great that the mayor attends. You wouldn't find that happening here in many places. :(

You're right about pushing back. There's also a tremendous feeling of joy as you check out the faces.

I think my favorite is the guy with the rainbow beard! Happy Pride, Steve. Nice to see people rejoicing!

I'm with Ellen.... I love the rainbow beard! (it might be fun even when it's not Pride Month... a little display of Pride year round)

I'm glad you stopped by the festivities so you could share photos with us.

Love the shot of the multi coloured bearded, he looks so happy

I'll echo the others - the rainbow beard is my favorite, but all of the photos are excellent. I love to see people dressing (or barely dressing) outlandishly. Fun!

Mitchell: Every year I think, "Do I really want to get in the middle of all that craziness?" But then I'm so glad when I go!

GZ: Indeed! It was a fun, positive day.

River: Well, like I said, it's pushing back against hetero-normativity. Just taking that rebellion to the next level. I totally get it, honestly.

YP: Ha! Fortunately I just heard the turaco at the cemetery (see next post) so I know it's not part of anyone's costume. :)

Andrew: The crowds were amazing. I read that a million people were expected to attend.

Ms Moon: It was the most positive day I'd experienced in a while, too!

Sharon: What's funny is, I pointed the camera at that bird guy and he immediately slipped into a series of poses. He knew how to work it!

Linda Sue: As the guy's jacket says, "Love Will Win!"

Jenny-O: Glad you liked it!

Allison: I saw that video! I thought it was so telling that the counter-protesters were crotchety fossils. Their kind is dying out, slowly but surely.

Jim: That bird guy gets some serious points for creativity! (And courage!)

Margaret: It's a major event in London and he knows most gays vote to the left, so a Labour mayor wouldn't miss it.

Red: Exactly. Everyone was just so happy. It was a refreshing change.

Ellen D: The beard guy was so funny -- I asked to take his picture and he said yes but talked about how he's not used to being photographed. I'm glad we made one work!

Kelly: Ha! Well, I'm not sure one would want to walk around like that ALL the time. Adds to those morning get-ready-for-work chores, for one thing. :)

John: He was a nice guy! Italian, I believe, or maybe Spanish.

Bug: It's always interesting to see what people come up with!

Who doesn't love dressing up in a costume? Looks like great fun.

I love the rainbow beard. You know, I'm going to thank you for explaining so perfectly what I was missing. My community has a gay pride thing that seems to be growing each year. I am firmly convicted that everyone has the right to be who they are. I have been for years. My youngest daughter's godmother is gay, and 32 years ago, it WAS controversial. I live in a very conservative area. This year they brought in drag queens. To my thinking, it did not help the cause. Personally, I felt that it detracted (although it was hugely popular). This is the sort of thing that conservative minds hold up as 'the norm', and it reinforces their negative stereotypes, as well as their resistance. In one little paragraph, you have made me see it a different way. Thank you.