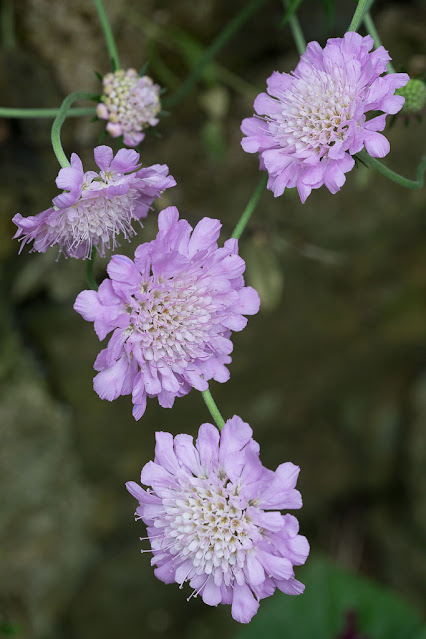 Once again, I barely left the house yesterday. I sat in the back garden and finished "Hidden Valley Road." Many of you observed in comments yesterday that it sounded like a sad book -- but somehow it didn't strike me that way at all. It was more like, look at this remarkable situation, and at what researchers have learned from it. While compassionate, the book is not a sob story. It's about the science of schizophrenia and how the individual members of that family were each affected, and how they coped. Apparently they wanted their story told. I enjoyed it a lot.

So, anyway, because I've been hanging around the house, it's time to catch up on the garden! A lot has been happening.

First of all, our scabious (above) has burst into bloom. 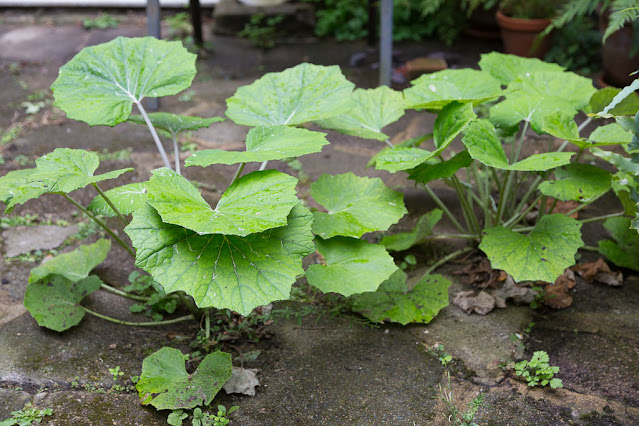 This is coltsfoot that grew wild between our patio stones. We've left it because it's such a nice looking plant! It blooms yellow in the spring. 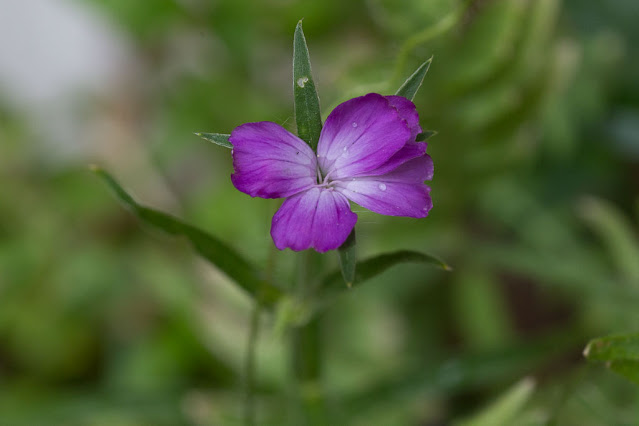 Here's a slightly lopsided corncockle. This is the third year I've grown corncockle from seed I collect from the previous year's flowers. 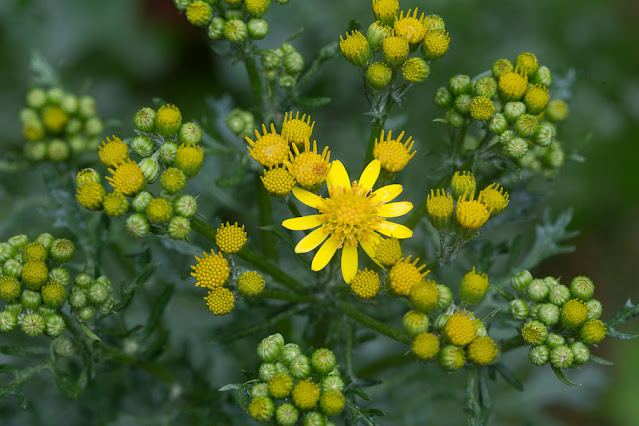 This is ragwort, which many people regard as a weed. But I like it and we let it grow in our garden. I took this just a few days ago and now the flower heads are almost solid yellow. 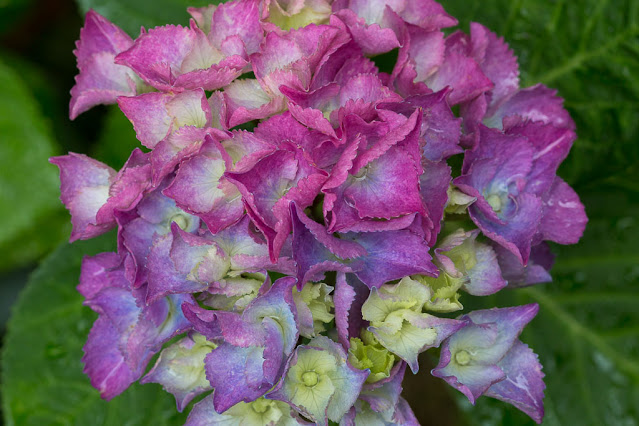 One of our many hydrangeas. They're mostly this color, even though some of the plants are supposed to be the Nico Blue variety. Dave has added colorant and done other things to adjust the acidity of the soil, hoping to get bluer flowers, but so far they persist in being mostly pink. I'm cool with that. 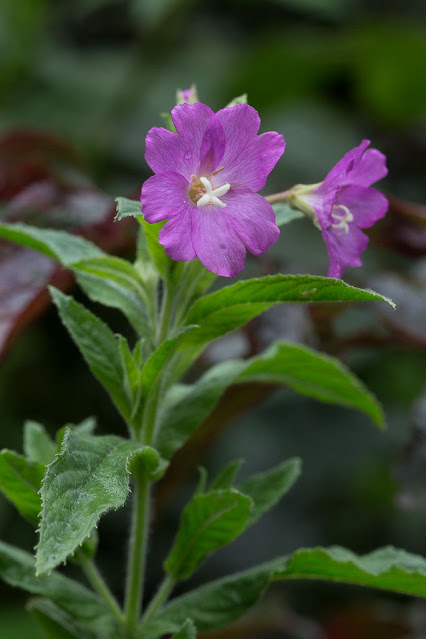 This is great hairy willowherb, a wildflower that we've allowed to grow in the back corner. It's kind of taking over, honestly. I may pull some of it up, but for now we're enjoying the flowers. 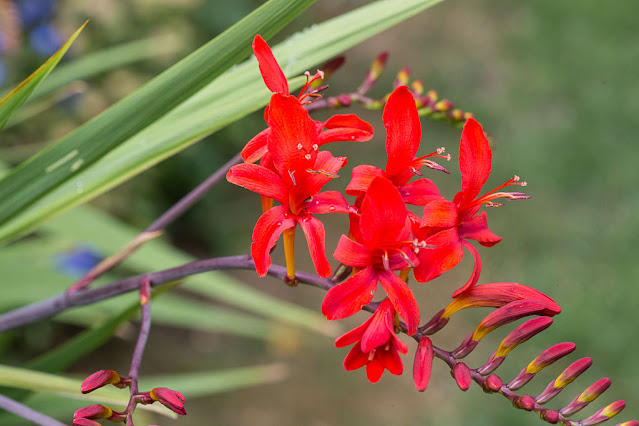 Our crocosmia "Lucifer" has added bright red flames of color to a few spots in the garden. 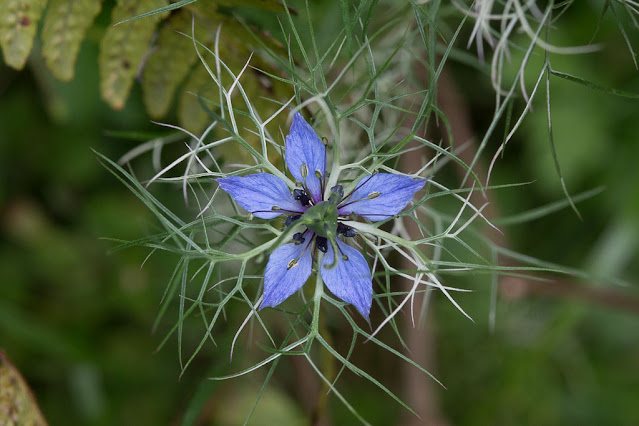 I don't know what's happened to all our Nigella -- we used to have quite a bit of it, but this is the only mature plant we have so far this year. I planted an envelope of new seeds but they don't seem anywhere near big enough to bloom yet. 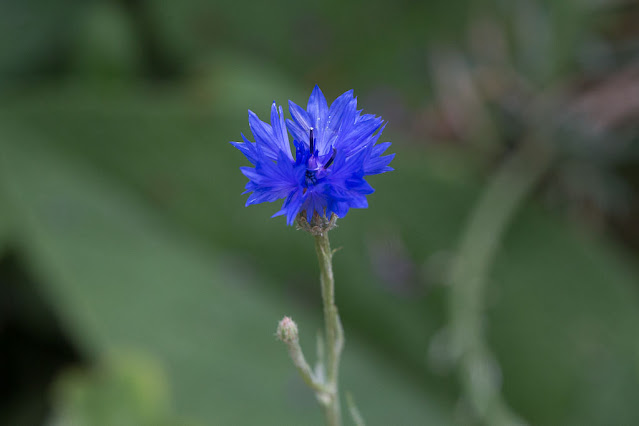 This cornflower appeared in our flower bed, apparently re-seeded from that wildflower mix I grew last year. 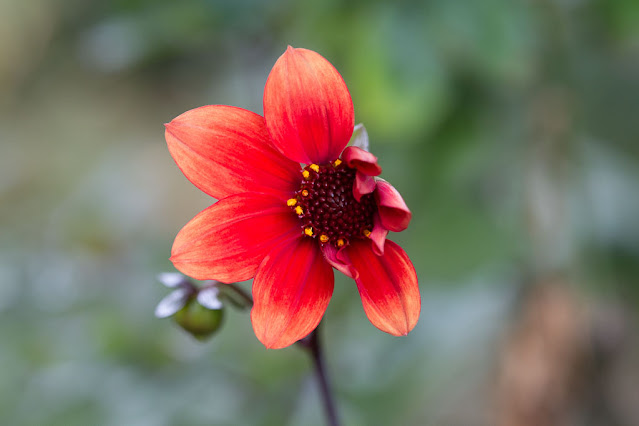 And finally, our "Bishop's Children" dahlias are starting to bloom. The first flowers are often a bit wonky, like this one, which looks like it's winking at us. (It has since opened more fully.)

Someone in the neighborhood has been setting off firecrackers the last few nights -- or maybe full-on fireworks, though I haven't seen anything in the sky. I've just heard the explosions. Fortunately Olga is pretty placid about fireworks. She doesn't love them, but she doesn't become a trembling mess, either. I guess a fellow American somewhere nearby is celebrating. (We ignored July 4th entirely this year, but then, we never really celebrate it. I'm just not a flag-waver.)
Posted by Steve Reed at 7:45 AM

Some great (as in odd) names for flowers! And all so beautiful. Even the scabies... um, scabious.

Recently I read that it is possible to receive treatment for anthophilia. It involves ice baths and electric shock therapy.

I think you can celebrate a national day without being jingoist about it.

Ragwort is a terrible plant pest species here. You being from the US are not to blame for importing it.

I'm sure I had a scabious cyst once.

Your flowers are lovely. My garden is largely green this year. So I have to come in here for color. I guess nobody's sensitive to ragwort then in your family?

If this was my beautiful garden, I'd never leave the house either! I like "official" fireworks but hate the neighborhood kinds, which -- regardless of ordinance -- never seem to stop at a decent time and always seem louder than the other boomers. I open the linen closet and Lizzie jumps in during thunderstorms and fireworks. I wish it was big enough for me to jump in with her!

PS -- A friend who doesn't have blogger (can't be a blogger "follower") asked if you had a subscribe by mail thing -- she loved your post on the PUllman car, even sent me a video about them from their own site, which you've probably seen. Have you thought of adding a subscribe by mail thing here or since blogger stopped sending notices, do you have to do it via a mailchimp (that's what I do) or feedly or similar? Just asking. Joan loved your post!

I needed some color on this hot and sticky, and not in a good way, and overcast South Carolina morning.

"Scabious" sounds like a horrible skin condition, not a beautiful flower!
A few of my millions of crocosmia are blooming. Like, four. They are lovely blooms.
What a treat you and Dave have created. Thank you for sharing with us.

Who needs to go out when you have such a colourful garden!
Have you any cinnabar moth caterpillars on your ragwort?
Wilted ragwort is really attractive to animals, despite being poisonous to them.

Not much to wave a flag about lately.
We once had hydrangeas at another house. The ones next to some pine shrubs were radiantly blue. See if you can steal some pine needles from somewhere.

Pretty pretty! Our neighbors asked for permission to shoot off fireworks in front of our house which I thought was nice. They had QUITE a display & it was great, but it lasted until after 11:00 which made me a little grumpy since I had to go to work the next day.

I wondered if that book would be too sad, but your review has me re-interested. I love that you leave 'weeds' in your garden. My view is that anything that flowers is good. I am not a flag waver, either.

I am always so pleased to see your beautiful flower photos. I also impressed that you know the fancy names for every one of them. I wonder sometimes if you just make up the names because I wouldn't know any different?! :)

After far too many of the recent Supreme Court decisions, it would seem more appropriate if US flags had been flown at half staff for a dying democracy.

Lots of lovely flowers. I have a similar post planned. I pulled up nearly all my crocosmia, the common orange. Only two or three were looking like they were going to bloom and I left those. They multiply like crazy, take over and really only a few bloom every year. Time to get rid of them.

These days, flag waving just doesn't feel the same as it did when I was young.
That crocosmia looks like it would attract hummingbirds. That color is a perfect draw for those little fellows.

This is were it got the name from. The plant (herb) was used to treat the itchy skin you get with scabies.

If I had to pick, I would say I prefer Hydrangeas in blue, but they're lovely in pink (or any shade between)!

On a side note... were you the one who recommended the book "Less" by Andrew Sean Greer? It came up at my book club meeting last night and I saw that I already had it tagged at the library. I didn't realize he was the same person who wrote "The Impossible Lives of Greta Wells", a book I really enjoyed!

All of your flower pictures are simply beautiful!!

So a trip through all the flowers makes a good post. You must have a colorful garden.

You do have the most beautiful, colorful flower garden. Ah summertime!

What beautiful flowers. Have you noticed how wildflowers always to be much smaller than garden varieties? I wonder why.

Lovely! That hydrangea has a little bit of every color. Lucky that Olga doesn't mind fireworks; my cat and my daughter's cat hate them.

I walked to the library tonight and found Hidden Valley Road. I'm 11 chapters in and am hooked. Already, I can see the pieces of nature and nurture and shame knitting together to create a perfect storm.

Mitchell: Ha! Yeah, I know, kind of an unappealing name for a flower.

YP: But why would I want treatment?!

Sabine: Thank you! And thanks for the info about scabious -- I did not know that!

Andrew: I think ragwort is a problem mainly for livestock because it's harmful to them.

Boud: I may be wrong, but I don't think ragwort is a huge allergen -- as opposed to ragweed, which is an entirely different plant and I know people struggle with that in North America.

Jeanie: Blogger did away with the e-mail subscription function, and yeah, I'd have to set it up with a third-party supplier like Mail Chimp, which I haven't done. Hopefully your friend can just bookmark the blog. Darn Blogger!

Ms Moon: I'm glad you finally got some flowers out of that crocosmia! I'm always surprised yours don't bloom more. Ours go nuts every year, though the Lucifer variety seems to bloom more than the small orange ones.

GZ: No cinnabar moths this year! I'v heard ragwort is a terrible problem for horses.

Marty: Interesting! Actually, now that you mention it, I remember blue hydrangeas in the South growing under pines.

Haddock: And such a pleasant surprise. I had no idea we'd get more of them this year!

Bug: Yeah, that's a little ridiculous. It's one thing to tolerate a little noise but not that late.

Susan: As they say, a weed is just a plant in the wrong place!

Ellen D: Ha! If I were making up the names they'd be MUCH more colorful, I promise you. Like "Trumpwort" or "Mitch McConnell Stinkweed."

Mary: It's dark times in the USA, that's for sure. I continue to believe this is all backlash from the Obama era and we'll grow past it in the long run.

Sharon: I agree. Waving a flag seems to imply a political perspective these days, one that I don't find very appealing.

Kelly: I read "Less" several years ago when it won the Pulitzer. I liked it but I'm not sure it was deserving of such a big win. I haven't read the other book you mentioned. I should look for it!

Marcia: Glad you liked them! :)

Red: Always colorful here in the summer! Different colors wax and wane as the weeks pass.

Robin: Indeed! I do love it and will hate to see it end. (No time soon!)

Pixie: I think garden flowers are hybridized for bigger blooms, and also tend to get more food and care than native varieties do in the wild.

Margaret: Yeah, I love the way the colors blend in that hydrangea!

Debby: Wow! You are plowing through it! I'm so glad you like it. Like I said, I literally couldn't put it down.

Keep an eye ion the nigella which I know as love in the mist, and save the seeds when they are ready and plant them in a pot that way you'll see if they germinate and can be planted out when big enough.

Your flowers are gorgeous! You have so many beautiful blossoms. It must be quite a treat to sit in your garden and read a good book. Hugs, Edna B.