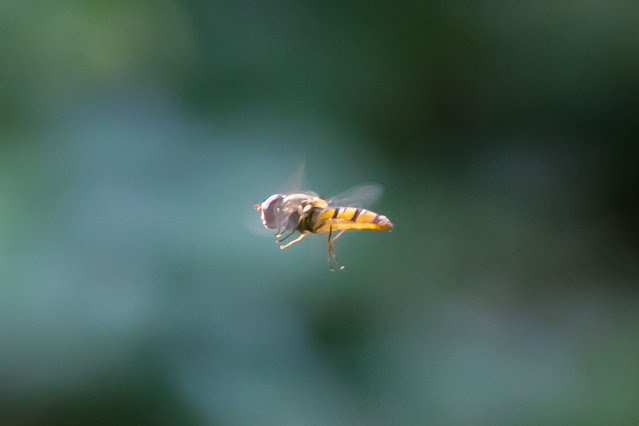 As I sat on the garden bench reading a couple of days ago, I noticed several hoverflies hanging in the air around me, audibly buzzing like little helicopters. I decided to try to get photos of them in flight. This is harder than you'd think -- they're so small the camera won't auto-focus on them, and although they hover, it's only for a second or two before they zip to a new position. I did get a couple of decent, only slightly blurry shots. 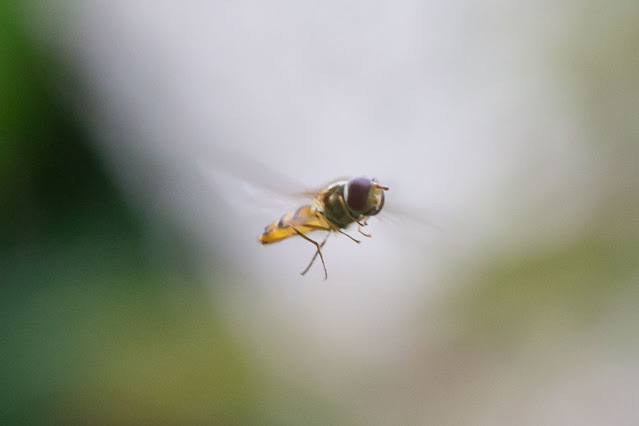 This was when I was reading "Hidden Valley Road," which as I mentioned previously is about schizophrenia. It occurred to me that I might look slightly off-balance myself trying to photograph these flies, staring at the air around me and pointing the camera at seemingly nothing. 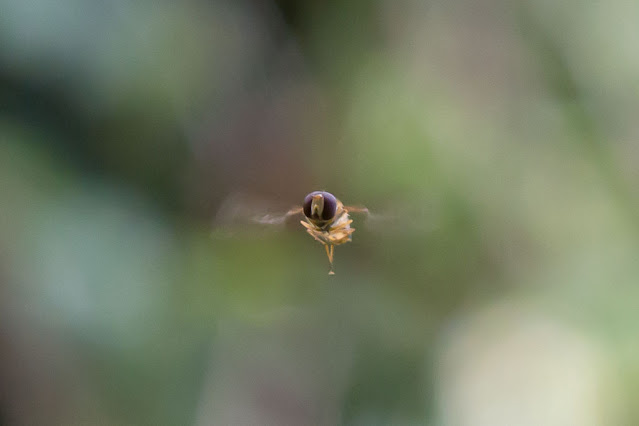 I spent a couple of hours working on the garden yesterday. I once again trimmed the neighbor's rose bush looming over our patio ("the monster"), pushing it even farther back toward the fence. Even more sun on the patio now! I also lightly trimmed the hedges near our bins and in the front of the house. The front garden is technically our landlord's responsibility but they never touch it unless we raise the alarm and I don't want to let it run completely wild.

Mrs. Kravitz texted me in a panic a few days ago saying she'd seen rats in her garden. She called an exterminator to put down poison and suggested we do the same. Now, I am not about to put poison in the garden. I don't want that stuff anywhere around me. But of course I can't control what she does.

I felt a little bad, thinking that the rats had been drawn by our bird feeders (which have been removed for weeks now), but apparently Mrs. K has a compost container and is also growing vegetables. The rats are in her veg plot and around her compost bin. Perhaps that's what attracted them to begin with. Anyway, their days are numbered. I asked her exterminator if squirrels would eat the poison by mistake and he said, "Not usually." Which isn't quite the unqualified answer I wanted, but then I saw the black boxes that contain the poison and it seems unlikely a squirrel would go in there. I still worry about foxes or owls possibly eating the poisoned rats. I hate poison. 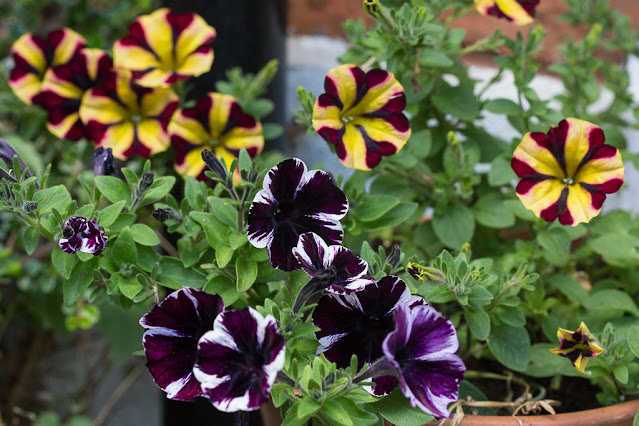 Here's a flower photo I forgot to post yesterday -- our petunias on the front patio. I bought a different variety this year and I really like them.

Dave and I took Olga to the vet in the afternoon for her annual vaccines. As always, she acted like she didn't even feel them and was mostly interested in the treats the vet was doling out. Afterwards, we walked down to the high street, and Dave went to the grocery store while Olga and I took a walk.

We passed the Oxfam thrift shop, and as I stood looking at the stuff in the window a couple stopped and stood next to me. "Oh, look at those crazy martini glasses," the man said to his companion, pointing to two globed-shaped glasses with conical inserts. Ice goes in the globe and, obviously, the liquor goes in the cone. He proceeded to tell her how he'd been served in a restaurant from such a glass and how cool they were.

Well, as soon as they left I went inside and bought the glasses right away, because -- martinis! And they were only £4 each. 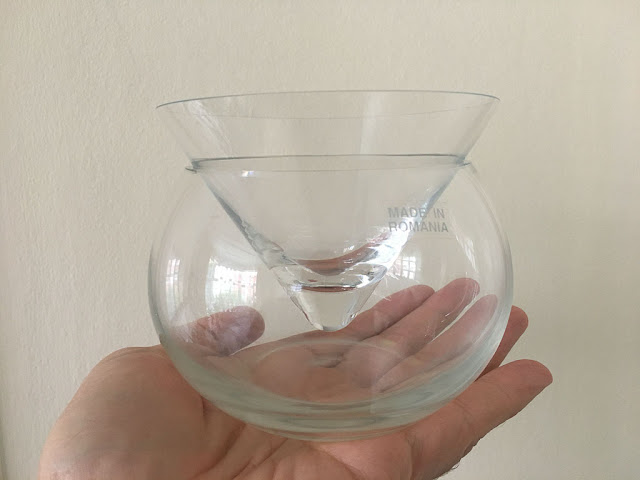 Don't you love the "Made in Romania" sticker? I probably shouldn't have put that front and center, but oh well. That was an incredibly awkward photo to take and I was more focused on holding the glass level.

Anyway, as the cashier rang me up, she said, "Do you know what these are used for?"

"Well...no," she said. She contended that they're meant to serve prawn cocktail. But then her younger co-worker joined her at the register and wrapped them for me while she helped another customer, and he said, "Vodka, right?"

So I guess they're multi-purpose. 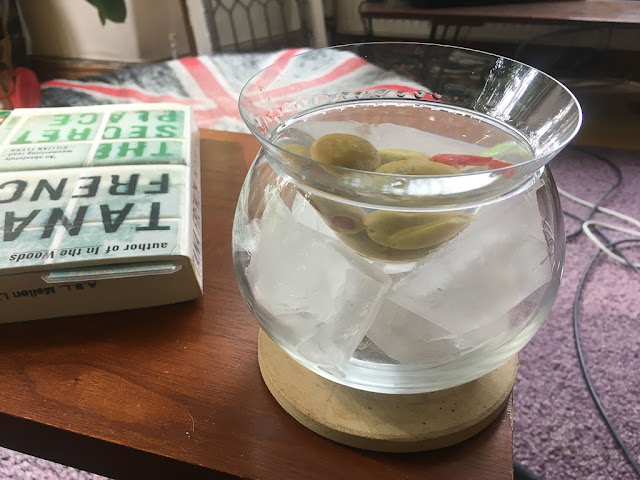 I can attest that they work really well for martinis, though.
Posted by Steve Reed at 6:34 AM

The photos of the flies are superb !

Your petunia is such a fancy girl.

The glasses are such a good deal, whatever they are intended to be. You have the right idea. They will get used well.

I’ve seen those glasses sold as martini/whiskey/cocktail glasses, and I was tempted to buy them, although I have absolutely no use for them. Wonderful little pieces of art. AND they were about €15 each. So, good deal! As for the hoverfly photos: Absolutely brilliant. Wow!

Did you know that if you park a red car under a car port where there are lots of hover flies trapped at the top, you get many little yellow spots on your car!!?
Interesting glasses...doesn't the top bit fall off when you drink...doesn't look as if it is attached!

Mitchell: Glad I got a good deal! I didn't see how I could go wrong at that price.

Frances: You don't pick up the bottom part. Just the cone. The bowl of ice stays on the table.

I don't like the way they look so I wouldn't have bought those glasses. I love the petunias though and great capture on the hoverflies. I've never been able to photograph one.

When push comes to shove you can drink anything out of these glasses and vice versa.
Very nice petunias!

Rats can squeeze through a very small hole. I don't think the others can.

The hoverfly photos are very good. As you say, very difficult to capture. Phone camera?

Oh, without seeing the glass properly, I thought ice went in the centre and the larger part was martini. Disappointing. Romania is getting smarter by not using a sticker but etching Romania onto the glass.

Good effort with the hoverfly pictures Steve! I wondered how many times a second their little wings flap and it is around 120 times! Amazing.

We have a set of those glasses and I never once thought prawn cocktail.
You're right: Martinis!

Cool glasses and great seizing the moment! Your flowers are striking. I don't think I've seen that variety of petunia.
I wish people didn't go immediately to poison as a solution. If Mrs k has rats in the compost she's not doing it right.

Definitely martini glasses. A very nice restaurant in Apalachicola used to use them! Excellent find!
Those garnet and gold petunias remind me of FSU's colors.
We sadly had to poison rats that were living in the walls of our house many years ago. It was a serious situation. I still feel guilty but it sounded like a frat house in there.

The glasses are interesting. We have never had rats in the compost. Just black bears.

It is fun to come across an unusual find at the thrift store! You got a good price and you are enjoying the glasses already! Success!
I wouldn't want rats in my yard. Is there a more humane way to get rid of them?
Those petunias are perfect! and the hover flies look like a type of bee!?!

I love those petunias and the glass is curious ... glad you got them for a good price!

I love the martini glasses. That's a great find.
When I visited you back in 2016, I stopped in that Oxfam store and bought a box of Christmas cards that I used later that year. That popped in my head when I was reading your post.
Great photos of the flies hovering in the air. I think you did very well with those shots.

Nice bee shots! INow I want to try to do that.
Love those petunias.
Bummer about the neighbors putting out poison. There are other ways to get rid of rats.
Nice and interesting new martini glass.

I love that martini glass - very innovative! And the hoverfly photos are excellent. Reminds me of trying to capture some of the insects on our wildflowers only you were much more successful.

I hate poison too :(

Does the glass get slick with condensation? I'd be worried I'd drop the thing and lose my cocktail! Honestly, I can see it being more practical as a vessel for shrimp cocktail, but clearly any kind of cocktail will work!

I think you did a great job of capturing the hover flies!

Thrift shops can have some very odd articles for sale.

My mother had a set of those and she said they were for shrimp cocktails. So multi use I guess. Hers were pale pink and had stem base, very 50's or 40's. I may have them stuffed away in a box somewhere.

Amazing shots of the flies! I love those glasses; they are genius and can be used for anything you want. I'm a huge fan of petunias, especially multi-colored ones.

I hope Olga steers clear of the rat poison! Mrs. K should rethink her compost.

Those glasses are fabulous. I wouldn't have known either but I could see them for any number of purposes. I would have bought them too!

You did pretty good with the flies. the 'martini' glasses look more trouble than they're worth. But I do like martinis. I really need to learn how to make them.