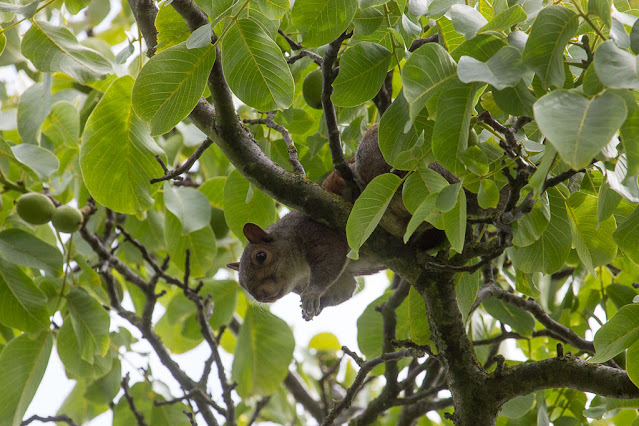 Remember how I said our garden was mysteriously devoid of squirrels this year? Well, at least one has managed to find its way back to our walnut tree, which as you can see is laden with nuts. I took this Saturday morning, and I'm hoping he comes back and brings his friends. (Yes, I am actually hoping for more squirrels! Remind me of this when they tear up our plants.) 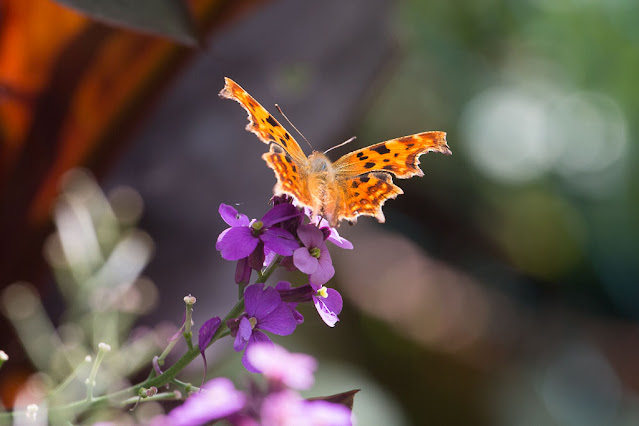 Dave and I have also talked about an apparent lack of butterflies this year, I think because it's been so cool. (It's 55º F, or 13º C, as I'm writing this post at 6:59 a.m.) But yesterday our garden was visited by this one, a comma. We've had a handful of butterflies but I expected more.

In the afternoon Olga and I walked to the cemetery. I was looking for the spotted burnets but they aren't around yet. Sometimes they appear in later July.

However, something else was around...


...the turaco! I hadn't heard it since March and I was afraid it had moved on to greener pastures. I heard it calling and followed its croaky squawk (trailed by a bewildered Olga) to a clump of trees just outside the cemetery boundaries, in the back garden of some adjacent flats. I couldn't see it at all, though. That's the shortest video in the world because right after I got there it called once and then stopped. At least we know it's still alive.
Posted by Steve Reed at 7:12 AM

I shouldn’t be surprised by the variety of wildlife in London. But I always am.

You caught the squirrel and butterfly very well. There seems to be many less butterflies around now than when I was young. It is rare to see one.

Of course the turaco was back. Its presence at the Pride rally was no longer required.

The butterfly is beautiful. I almost never see any butterflies here now.

Very few butterflies this year, birds, even fewer squirrels. I wonder if spring storns blew the butterflies and birds off course. We have a few non migrating butterflies. Your spottings are very welcome.

We have several butterfly plants and flowers and sometimes there are sorts of butterflies, and sometimes I think they cruise to the neighbors.

Well it seems all you have to do is question something's absence and it shows up! I hope you see lots more butterflies - they're so beautiful. (you can keep the squirrels there)

Perhaps it has all been about the weather. Who knows?
Anyway, glad your regulars have showed up again.

I would think those squirrels get that yellow stain all over them if they chew on those walnuts. When we were kids and were shelling black walnuts, our hands and arms would be stained with that iodine-like dye for a week or more.
Glad to hear the turaco again.

I love that the Turaco is back and that the squirrels have returned as well. Yay!
Your weather sounds as gray and cool as ours here on the California north coast. I wouldn't mind a blue-sky sunshiny day.

It's good that the Turaco is back, he's such a cool bird. We don't have butterflies here, and very few squirrels. Last year in August, there were no birds, but they're back this year. Where do they go?

Commas are such great butterflies. I haven't seen one in years.

Wow, the turaco really does have a croaky voice! It reminds me of our crows first thing in the morning. I don't know if they do it on purpose or if it's just their waking-up voice. lol

I'm glad you're glad to see the squirrel. All critters have to eat, and they can be such interesting little blighters.

That turaco is very frog-like! Interesting! I love YP's explanation for why it's been absent - ha!

Not many butterflies here as it's been cold and wet.

What a gorgeous butterfly! I love them; they're so magical.