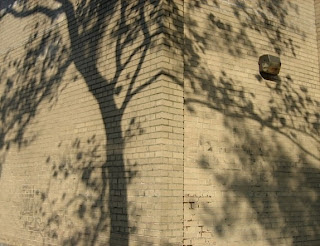 It always fascinates me how shadows wrap themselves around corners. Did you see the recent video of the octopus escaping from a glass box through a tiny hole? It basically compressed itself and slithered right out, which was kind of amazing to watch. (Here it is on YouTube.) Anyway, that's what comes to mind when I think of these shadows, sinuous and flexible, slipping into every niche. Obviously not the same scientific principles at work, but oddly similar somehow - or maybe it's just me.

The other night I wrote a post about my favorite record albums (if they can even be called that anymore). I thought I'd list my top 10 and tell a little about why I like them. I sifted through all my CDs and eventually wound up with a top 20, which was as far as I could distill my favorites. Then I wrote for an hour or two, explaining why each one was special.

The next morning I read it and HATED it. First of all, the idea of a favorites list is pretty short-sighted, since favorites change with mood and circumstance. Second, I can't pretend to be an expert on what makes songs musically distinctive. It's all so subjective, and many of my judgments are deeply influenced by nostalgia. I think the whole premise is flawed. So I scrapped it.