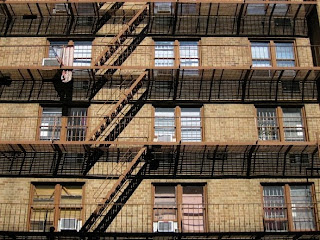 The orderly rhythm of these fire escapes, near E. 89th Street and Second Avenue, first caught my eye. But as I took some photos, I paid more and more attention to the faded, tattered flag hanging from the railing at upper left. I'm sure this flag is a remnant from Sept. 11, 2001. 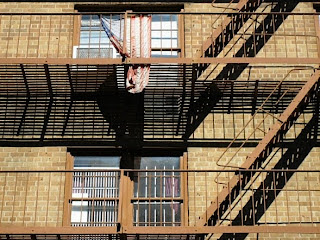 Immediately after the terrorist attacks, lots of people put out flags. (Even I put a flag in my window, and I am one of the least likely flag-wavers you'll ever meet.) It was almost an instinctive reaction. For me, it was a way to express a sense of unity and support with all my neighbors. I didn't think of it as nationalistic or jingoistic, though it seems more that way now.

Every now and then I still see one of those flags, tattered and dirty but nonetheless on display. Long ago, when I was an impressionable Boy Scout, I remember learning all about the proper disposal of old flags - they're supposed to be ceremonially burned when they deteriorate. (Ironic, given our government's attempts to ban flag-burning!) I guess these folks were never Boy Scouts - and where in New York City could you burn an old flag, anyway?
Posted by Steve Reed at 11:34 AM