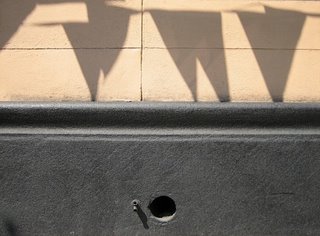 Outside Bloom's Deli, someone put up two rows of those little triangular car-dealer flags. I like this photo of their shadows because it incorporates round, rectangular and triangular shapes. A good exercise for pre-schoolers, eh?

I know everyone is curious about my adventures at speed-dating last night. (If you're not, you're excused...you may leave the room now.) I'll see if I can concisely explain what happened.

About 55 guys showed up, and everyone was assigned a name tag with a unique number. We sat in two rows, with one row stationary and the other moving every three minutes. We'd have a three-minute conversation with some random guy, a signal would be given, and the moving row would stand up and shift down one position so we'd be talking to the NEXT random guy. At the end of an hour (and 20 "speed dates") we had a brief mingling period to meet anyone else in the room, and then we filled out little computer cards with the numbers of the people we'd like to go out with. Those cards were scanned for matches.

It was weirdly exhausting. Each conversation was a little different, and there were some laughs, but I essentially found myself repeating the same information over and over: job, hometown, hobbies. After a while I got a little hoarse (the room was surprisingly loud) and the faces began to blur. By the mingling period, I wanted out of there!

Good news, though: Of seven numbers on my card, three matched. So I exchanged phone numbers with Dave, Nathan and Robert, my future dates.