This was the scene at 11 Spring Street over the weekend. You may remember that I mentioned this building back in October; it's been a longtime mecca for street artists, but was recently sold and is now due to be converted into condos. As a sort of farewell, the new owners, along with folks at the Wooster Collective, staged a massive street art exhibit there. 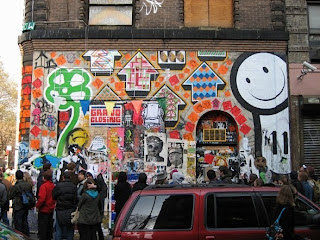 The interior walls of the building were used as giant canvases, with artists invited to paint them; they'll be covered up by drywall in the renovation, but not removed. The exterior turned into an ever-evolving mishmash of art. One artist would paint something and it would stay up for a short while, and then be slathered over by someone else with new art. I think the art must be an inch thick on the walls! 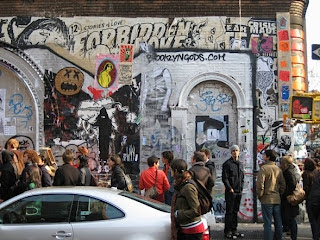 This is the same corner I shot in July (see earlier post, linked above). As you can tell, the dog is long buried under all that other stuff. The art on the outside walls will be cleaned away with the condo conversion, by the way.

I walked down to this exhibit to get a look at it, but I have to admit I was so put off by the crowds that I didn't hang around. There's plenty of street art out on the street to enjoy; why get in the middle of a big spectacle? (This is an aspect of my personality that doesn't always serve me well in New York - I don't like competing for leisure activities. I'd rather not stand in massive lines to see a popular Broadway show, for example. I'll just go see something less popular. As a result, I sometimes miss the hottest shows!)
Posted by Steve Reed at 11:59 AM