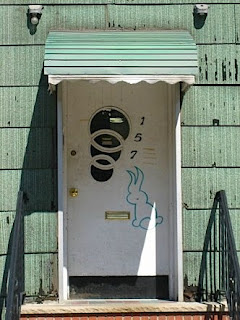 I found this interesting door when I went on the graffiti walk in Williamsburg in September. Like my "Find the Fish" photo on Friday, this has sort of a Monty Python connection - remember the killer rabbit from "The Holy Grail"?

Last night I went to see "Bobby," Emilio Estevez's film about the hours before Robert Kennedy's assassination. It's terrific! Good acting, compelling storylines, and most of all moving. I teared up more than once, particularly during the newsreel footage, which was incredibly painful to watch. Estevez is obviously holding up a mirror to our own time. The movie is only superficially about the death of Kennedy; it's really about being caught in a scary time, and having hope, and then seeing that hope destroyed. I don't understand why the critics didn't fall all over themselves to praise "Bobby"; they got hung up on the number of characters and the fact that many of those characters are only briefly on the screen. But I felt like I connected with all of them in some way.