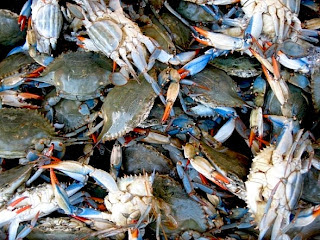 The produce and seafood markets in Chinatown are wild. These crabs, with their bright blue and red shells, were so fresh they were feebly crawling over each other in the bin. I had a desperate impulse to buy them and take them over to the East River, but I doubted they would survive being returned to the wild. (And who knows where they're actually from - I'd probably be introducing an exotic species that would mess with the local ecosystem!)

When I began practicing Buddhism several years ago, I wrestled with whether or not to become a vegetarian. I've never been much of a meat eater, and for years in my early and mid-twenties I ate no meat, so it wouldn't have been difficult. But I also run and lift weights, and I feel like my body needs ample protein.

At our Zen services we repeat a verse called the Four Vows, one of which is, "Sentient beings are numberless; I vow to save them." Eating sentient beings seems in stark conflict with this verse! So I talked about this with my Zen teacher, who pointed out that traditional Buddhist cultures in Asia are not strictly vegetarian, and in fact in places like Tibet there's not a whole lot to eat besides meat. There's always a tension between our desire to be compassionate and what our bodies require to live.

For now, my rule is that I don't eat anything with legs, except chicken and, rarely, turkey. (I tried impala when I went to Botswana this summer - I didn't think I could pass up THAT chance!) And as with most rules, it's best not to be too emphatic - on the rare occasion that I go to someone's house and they've made a beef stew, I don't turn up my nose. I eat it.

But it's still an uneasy balancing act. I try to eat meat minimally, and when I see critters like these crabs in Chinatown, I still have the impulse to buy them and set them free.
Posted by Steve Reed at 10:30 AM